Sadhguru explains what exactly is needed to accelerate the farmers’ shift to agroforestry, which will help revive India’s soil, revitalize our water bodies and increase farmers’ incomes.

Sadhguru: The Cauvery basin spans 83,000 square kilometres. In the last few decades, 87% of the green cover across the basin has been removed. Cauvery Calling is a campaign to bring back at least one third of this to green cover.

This is something we have been preparing for, for over eighteen years. We have converted 69,760 farmers in Tamil Nadu from regular farming to agroforestry, with which their income has multiplied 300-800% in 5 to 7 years. So now we are one hundred percent confident that this will be a solution for the farmers’ economics. This is essentially an economic plan with a significant ecological impact.

We have presented certain aspects which will accelerate adoption of agroforestry by farmers, to both the state governments of Karnataka and Tamil Nadu, which we also presented to various ministries at the Center. Tamil Nadu has already agreed to these in principle, and Karnataka’s Chief Minister has said that they will definitely follow up on this and make it happen. They just need some time to work this out within the departments because this needs a little reallocation of the existing schemes.

When the farmer moves to agroforestry, for the first four years, he goes through a phase where he loses part of his income, so he needs a little bit of support at that time. The farmers need some incentive for the first 3-4 years because they have to change their mindset and the way they approach their land when they shift from a three-month crop to a long-term crop.

On average, farmers are making 45,000 rupees per hectare. When they shift to agroforestry, in the first two years, their income may drop fifteen to twenty percent. In the next two years, it may drop anywhere between thirty to forty percent. In the fifth year, it may drop up to fifty percent. From the fifth year onwards, their income will grow in a very big way. So the first four years of transition are when the farmer needs a little help.

We have appealed to the Karnataka and Tamil Nadu governments to support farmers to shift from regular farming to agroforestry. Both governments have responded positively. For this, the government does not have to allocate any new money. The existing schemes just have to be redirected. That is what we have done in Maharashtra, where we are working to revitalize Waghari river.

This is a 54-km river which is a sub-tributary of Godavari. It flows through Yavatmal, which unfortunately is called the suicide capital of India for the large number of farmer suicides here. The state government has approved a budget of 415 crores. Ninety-three percent of the budget came from existing schemes. We are raising the remaining seven percent as CSR funding from many people, so that the government has to just re-allocate what is already there.

India is importing 70,000 crores worth of timber. Why shouldn’t our farmers sell timber?

As part of Cauvery Calling, we are also talking to the government to relax the laws for cutting trees that farmers grow on their land. Timber should not be treated as forest produce, it should be treated as agricultural produce. There is no room for taking timber out of forests anymore in India – that phase of our development is over. If we want timber today, we have to grow it. This can happen only if timber is seen as agricultural produce.

Just as there is a coffee board and a tea board, we want a timber board through which these transactions can happen. There is a four-hundred billion dollar timber export market in the world. India is importing 70,000 crores worth of timber. Why shouldn’t our farmers sell timber?

Another point we are talking about is how to integrate micro-irrigation large-scale. Micro-irrigation is already one hundred percent free for one acre, for regular farmers. We want that to be extended to agroforestry also. Agriculture consumes 84% of the water in India, so unless we go for major micro-irrigation processes, our water consumption is not going to be reduced. If you go for micro-irrigation, according to data from other countries where they are growing similar crops, the consumption of water will be anywhere between fifteen to twenty-seven percent of what we are using right now. We are a heavily populated nation with minimal water resources but we are using water so excessively simply because there is no such knowledge with the farmer on how a specific soil or crop should be irrigated.

It is time that agriculture becomes a lucrative process and a prime activity in India. If you don’t make it into a very lucrative process in the next twenty-five years, we will lose our ability to grow food in this country. As a part of this, agriculture and particularly tree-based agriculture becomes very important. With this kind of population, if you want to save this land and maintain the quality of the soil, more food should come from trees. This is very important. Jayaprakash Tk
02 August, 2020
I have a coffee plantation in Kudagu Dist. Karnataka.
If I plant few thousand of Mahogany trees in the plantation will the forest authorities give permission to cut them as timber when they grow mature in rotation and replant again?.
REPLY
POST Kavitha Biju
18 September, 2019
Namaskarams, I am fundraising for CAUVERY CALLING. Kindly click on my support page given below.Pranams

Kar Kun
18 September, 2019
Namaskaram.. I have 40 acres of land near Hyderabad. Can i adopt agro forestry? If so would like to know the process for the same. I kindly request you to provide me the necessary info/details for doing agro forestry.
REPLY
POST

Sadhguru explains how Cauvery Calling is a complete plan that addresses water crisis... 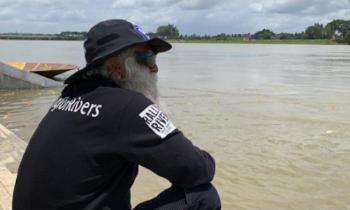 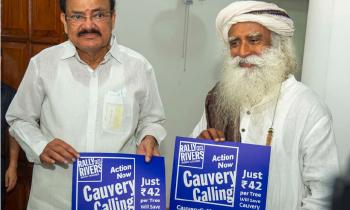 As India approaches her 73rd Independence Day, there is another freedom struggle looming...