Adventures of Narendra: On the Farmers’ Trail of Cauvery Calling

Embracing hostility, indifference & love in equal measure… a peek into a day of volunteers on the Farmers’ Trail of Cauvery Calling.

Narendra, age 28 from Bangalore, has a Bachelors in Mechanical Engineering, and a PG in Electronics and Aeronautics. Currently, he is working as a mechatronics product developer. He has been volunteering for Isha’s projects for the past 2 years. "I want to see the world full of happiness and live for nature," says Narendra as his life aspiration. Below he shares about an eventful day of Farmers’ Outreach.

On August 27, 6 AM, we set out for another adventurous day in the villages of Karnataka. Today we were visiting villages of H.N. Pura Taluk. Here are some interesting glimpses of my day:

When The Flyer Didn’t Fly

This morning we went to Halekote village, H.N. Pura Taluk. When I entered a restaurant to spread the awareness about Cauvery Calling, the people sitting there spotted me with the flyers and immediately told me that they were not interested. They did not even allow me to speak one full sentence. Two young guys in the neighboring bakery called me over and listened to what I had to share. They were very moved by someone else worrying about their farming problems. They immediately signed up to plant trees. They called many of their friends not only from this village but also from three of the neighboring villages. In no time at all, there were more than 20 youth registering for saplings. As soon as this happened, the older folks from the restaurant, who had mocked and discarded the flyers some time earlier, slowly crept over my shoulder and began to give their details too. They were ready to receive training in agroforestry and register for saplings.

Even the village temple’s bull warmed up to us. He walked with me everywhere I went, all the while nuzzling at me while I continued to explain agroforestry to farmers.

They Came to Beat Us with Sticks, But...

Anothersuch drastic change in reception happened yesterday in Honavalli village, Alur Taluk. Hearing the word “agroforestry” sent them into a fury! The agitated villagers came out shouting, threatening to hit us with logs. On asking around, we found out that just the previous night, elephants had walked into the village from the nearby forest and had destroyed half of the crops. The other half was washed away by floods this year. The moment they heard the word “forest,” they were reminded of the the rampage by the elephants.

But when they came at us wanting to hit us, we remained calm, and listened to their woes. It's painful to hear about their situation. Having a very small piece of land and having to face such troubles can be truly enraging!

As we stayed calm, they also calmed down and sat down to hear what Cauvery Calling had to offer. They were so happy to know that even such small farmers as themselves could benefit from agroforestry, especially in an elephant-attack zone with irregular rains. Seeing them happy made us so happy.

A Timber Tree and a Happy Father

The same afternoon I met a father who has tasted the fruit from the sale of his 15-year old timber trees. He used the money from this yield to pay for his daughter's wedding. He also bought 5 acres of land from the money he made from tree sales. “I planted trees in these 5-acres for my grandchildren,” he said with a gleam in his eye.

In the same village, Ganjalagodu, H.N. Pura Taluk, I met a high school teacher, the wife of a Physical Education teacher. She had double degrees and a PhD. This family moved from a city to the village and have been practicing agroforestry for the last three years. “This generates more money with less labor and also allows us to take up another job as the maintenance is quite low,” this couple shared with us.

Saplings for My Helmet

I have been riding my bike for over 2000 kilometers, campaigning for Cauvery Calling. Today it so happened that due to the evening rain, I parked my motorbike, with my helmet on it, near a shop and took shelter in the car of another volunteer. We had talked to a few farmers in front of that shop earlier.

Once the rain stopped, I went back to pick up the bike but my helmet was missing. As I was looking here and there, “What are you looking for,” I heard the shopkeeper say. I told him about my missing helmet. =

“How much did it cost?” he questioned me.

I told him a number.

“If you can get me three hundred saplings, I will return your helmet which I have been safeguarding from the rain and theft'' he said, with mischief in his eyes. 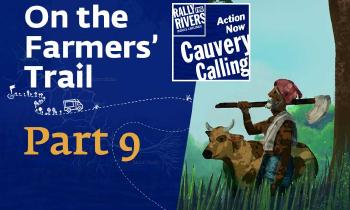 Overwhelmed by the bleak realities of farmers and Cauvery, our volunteers resort to poetic and... 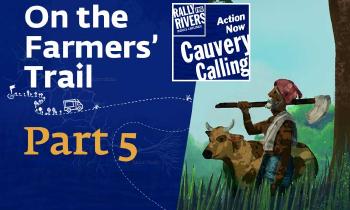 #Cauvery is Calling, and look who heard! Read about an unusual encounter of our millennial Gen... 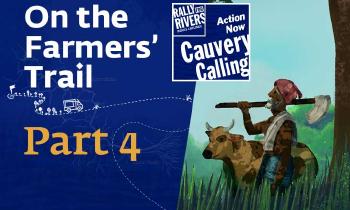 Here’s the interesting message that farmer Vanambadi wants to share with all the farmers of...