Jyotiprakash earns up to 25 lakhs per annum from his farm. But not so long ago, this was just barren land.

The Cauvery Calling team had an absorbing conversation with this inspired and inspiring farmer from Chamarajanagara District in Karnataka.

In the back alleys of rural India, inspiration walks quietly. “If a man puts his heart into it, he can do anything he wants. There is no bigger thing than a heart so you should have willpower.” Those are not the famous words of a celebrity. They are spoken by Jyotiprakash, a farmer in Chamarajanagara District, Karnataka.

“I drilled 11 borewells (tubewells) in my 8-acre plot and hit water in only one of them — about 1.5 inches of water,” the painful memory resurfaces.

Jyotiprakash inherited a lost cause. “When my father handed over this land to me, it was just barren land,” he recalls. “I drilled 11 borewells (tubewells) in my 8-acre plot and hit water in only one of them — about 1.5 inches of water,” the painful memory resurfaces. “There was no drip irrigation at that time; for 6 years, I struggled to water my farm."

Though he started with just one crop on a farm with no irrigation system and had to contend with many naysayers, Jyotiprakash says he never gave up because he loves the soil. “I like soil very much, so that is why I don’t go anywhere,” he says, adding that he was excited to participate in the Save Soil event at Mysuru. “It was so good. After coming back from the program, I felt I should do more. I’m not letting my soil go anywhere, I’m saving soil,” he smiles.

His advice to every farmer is to invest in water harvesting. “If every farmer does this, then there is no problem. I created badhugalu (humps on the borders). Water won’t run out even if it rains for 2-3 days continuously. If I get one rain, then I don’t need water for at least one month,” he reveals. As soon as it became available, he adopted drip irrigation, drastically reducing irrigation costs and protecting soil vitality. 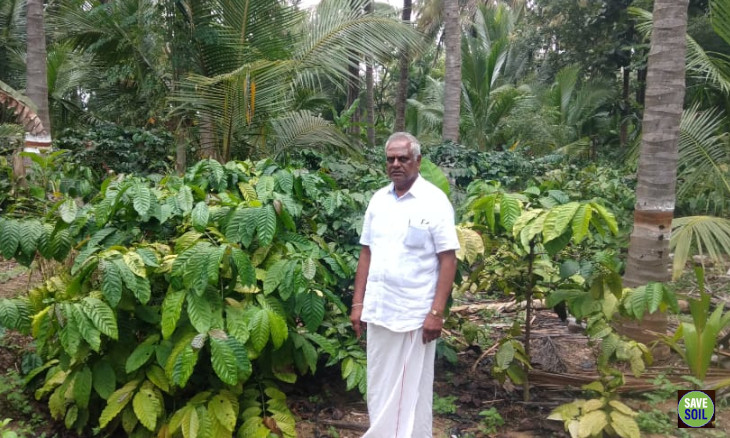 As for fertilizers, he hardly buys any—“not even 10 kg,” which is next to negligible. “I prepare and feed jeevamrutham through the drip system.” The leaf litter from his trees is rich manure; it also builds and retains moisture in the soil. “Whatever waste leaves fall, I don’t throw it out; I just let it be there. Even if it doesn't rain for one year, my farm won’t go dry; because of leaves waste, the land is wet,” he explains.

So, what is his formerly barren land earning him now? “Rs 20-25 lakhs,” is the proud response.

Jyotiprakash’s farm is in the Cauvery River basin, and he’s no stranger to the river’s woes. He says that multicropping and tree-based farming are the way forward to protect the river basin’s fertility and enhance its water-holding capacity. He knows this through experience. “In future, at least 80% of agriculture must be tree-based agriculture,” he echoes the mission of Cauvery Calling an initiative to put a third of the Cauvery river basin under shade by promoting tree-based farming on private farmlands in the basin. “I started with just sugarcane but we should not depend on only one crop.” Today, he has coffee, pepper and banana in addition to coconut, teak and mango trees. He harvests richly and regularly. “If you do tree-based farming, you will have so many benefits, you won’t face any loss,” Jyotiprakash asserts. “And it will help the country,” he adds.

So, what is his formerly barren land earning him now? “Rs 20-25 lakhs,” is the proud response. “I settled all my loans. I’m living peacefully,” he says. “Human beings cannot eat money, they have to eat food, so farming is the basis for us,” he says, proud of his legacy.

But with so many other more lucrative employment opportunities, will his son continue to farm? “There is nothing for him to do. He just has to protect this and go on; this is my opinion.” He knows that no one knows what the future holds. “We don't know what scientific advances will come, so what I say to him is ‘if it comes, you adopt that and continue. Don’t quit farming because we have lived only because of farming.’

Editor's Note: Read more on how tree-based agriculture has transformed the lives of farmers in the Cauvery River basin here - on the farmer's trail. Cauvery Calling is the world’s largest farmer-driven ecological movement and is supporting 5.2 million farmers to plant 242 crore trees in farmlands. Make your contribution online to save Cauvery. Donate ₹42 per tree at cauverycalling.org. Action now!

Log in / Sign Up
to join the conversation
Keep in touch
Get the latest Cauvery Calling updates delivered to your inbox.