Cauvery Calling continues to fire on all cylinders as activities on various fronts have been happening full throttle on the ground.

Apart from the regular activities that have been progressing steadily, we have seen three major plantation drives in Tamil Nadu since July, through which over half a million saplings were planted by farmers in their own farmlands across the state. In addition, four mega training programs on tree-based agriculture were conducted in four districts of Tamil Nadu, in which over 4000 farmers participated and benefitted.

In Karnataka, an MoU has been signed with the government that will rev up the synergy between Cauvery Calling and various government-based schemes to boost tree-based agriculture in the Cauvery basin.

All this and more in this edition of our quarterly update ...

Cauvery Calling is among the top innovators of the Trillion Trees: India challenge, an initiative of the World Economic Forum (WEF). In this context, the WEF has posted a riveting two-minute video about Cauvery Calling on their UpLink platform (an open innovation platform that creates bridges for entrepreneurs to connect to the investors, corporate partners, experts and other organizations they need to scale). The video showcases, in a simple, succinct, and lucid manner, what the problem is, how Cauvery Calling aims to solve it, and the impact the project envisions to create.

This project could plant 2.4 billion trees in India. 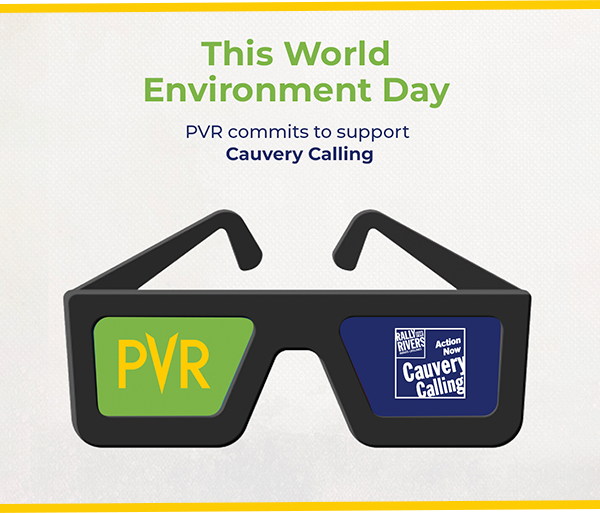 Did it ever strike you that you could also be saving a dying river as you watch your favorite movie!?

Going to the movies no longer has to be just about entertainment. You can also do your bit for the environment while glued to the silver screen. Thanks to PVR cinemas, you can offer your two cents – rather two rupees (Rs. 2) towards Cauvery Calling each time you book a ticket.

So go ahead, enjoy your favorite drama, or be driven to the edge of your seat by a suspense thriller. And while you are at it, chip in to support an initiative that will not only increase the green cover and boost biodiversity, but also secure the livelihoods of farmers who work tirelessly to put food on our plates every day.

Could it get any better? 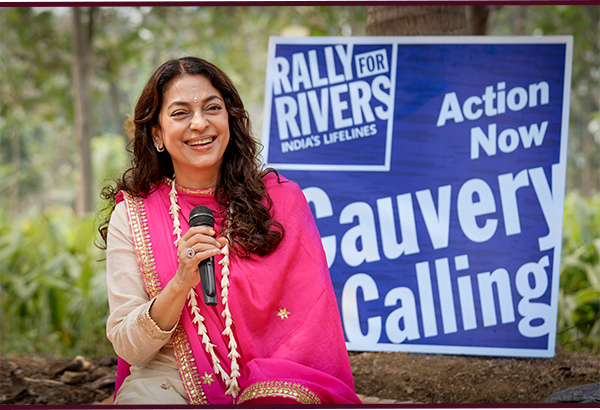 Juhi Chawla has been a steadfast and unrelenting supporter of Cauvery Calling since its inception. She never misses an opportunity to gift her friends, colleagues, and loved ones, by sponsoring trees for Cauvery Calling. She also met farmers in the Erode district of Tamil Nadu to understand firsthand the on-ground impact of Cauvery Calling.

The donation campaign she created to raise funds for 1 lakh trees successfully accomplished its target and is still running strong. Her effort is an offering of love for our revered mother Cauvery, and her hard-toiling sons and daughters.

Thank you, dear Juhi, for your unwavering commitment to save this sacred river, and along with her, the lives of millions of people and billions of other life forms that she sustains and nourishes!

Meet Anaadi Vikram Mishra, a participant of the Sadhanapada 2022 program (a 7-month residential program for inner transformation at the Isha Yoga Center in Coimbatore, India).

Passionate about supporting Sadhguru's vision of reviving Cauvery, Anaadi launched a fundraising campaign for 65,000 trees to present them as a gift to Sadhguru on his 65th birthday. The campaign not only accomplished, but successfully overshot the goal, and ended up raising funds for 100,000 saplings.

Earlier this year, Anaadi had also bicycled 4000 kms, all the way from Kashmir to Kanyakumari, to spread awareness about the Save Soil movement. He is a fine example of how people like you and me, can rise to the occasion and do extraordinary things that would otherwise seem impossible with grit and commitment! Thank you, Anaadi Anna, for being such an inspiration. We salute you!

The Government of Karnataka and Isha Outreach have signed a Memorandum of Understanding (MoU) to work together and achieve synergy between Cauvery Calling and various government-based agroforestry promotion schemes in the districts which form part of the Cauvery basin, viz., Kodagu, Mysuru, Mandya, Bengaluru Rural, Chamarajanagar, Chikmagalur, Hassan, Ramanagara and Tumkur.

This MoU, signed on 22 August 2022, is a huge boost to the combined vision of the Govt of Karnataka and Cauvery Calling to promote tree-based agriculture, which will not only increase the green cover but also significantly augment farmers' incomes in the aforementioned districts.

Congratulations to Govt of Karnataka for your commitment to raise farmers' incomes by incentivising tree-based agriculture. The MoU between GoK & #IshaOutreach will help revive #Cauvery, #SaveSoil & bring wellbeing to farmers, our annadaatas. This is the way forward. - Sg https://t.co/gvuITiB9aD

1) One such program conducted in Thirukalukundram village in Chengalpattu district saw more than 1100 farmers participating and benefitting from the training. Even the rain, which was pouring heavily the previous day, took a break during the training program!

Cauvery Calling movement's field coordinator, Mr. Tamilmaran, addressed the audience and explained the need for tree-based agriculture. This was followed by a question-and-answer session and a field tour. The training program finally ended with the never-ending taste of delicious 'Black Kauvni Rice Pongal'!

2) Another seminar was organized on 18 September at 'Little Ooty', a farm in Thuraiyur taluk, Trichy district. About 1,500 farmers from all over Tamil Nadu participated in this event. Various pioneer farmers and agronomists shared their experiential views on the vast scope of tree-based farming.

A pioneer farmer Mr. Poomalai, spoke about the income opportunities from Melia dubia, and pepper cultivation in the plains. Next, Mr. Mayavel, a scientist at the Institute of Forest Genetics and Tree Breeding (IFGTB) in Coimbatore, spoke about the rising demand for timber in India and how that demand can be met domestically.

Further, Dr.Haridas, retired associate director of agriculture, elaborated on the multiple ways of profiting from jackfruit trees, as they generate income not only from the fruits but also have timber value.

Following him, the field coordinator of Cauvery Calling, Mr. Tamilmaran said, "Due to Sadhguru's efforts and the fieldwork of Cauvery Calling volunteers, the interest of farmers to switch to tree-based agriculture has increased. And to make the tree saplings easily accessible to farmers through Isha Nurseries, we are distributing quality timber saplings exclusively to farmers at a subsidized cost of Rs.3."

On 10 May, a training event was conducted by the Forest Department of Karnataka in Aranya Bhavan, Bengaluru, where 110 Karnataka State Forest Department officials, namely, DFOs, RFOs and ACFs, from nine districts along the Cauvery basin were present to get trained in plantation methods, species selection and also on sandalwood cultivation.

Plantation Drives - Over Half a Million Saplings Planted

Over half a million saplings were planted across Tamil Nadu through the following four plantation drives:

1.) Vana Mahotsavam or the Great Forest Festival, is nationally celebrated every year in the first week of July. To commemorate this annual occasion, this year, the Cauvery Calling team enabled farmers across Tamil Nadu to plant 2.1 lakh saplings in 37 districts of the state, including Coimbatore, Erode, Tirupur, Krishnagiri, Thiruvannamalai, Villupuram, Chengalpattu, Cuddalore, Dindigul, Karur, Namakkal, Trichy, Tiruvarur, Thanjavur, Pudukottai, and Tenkasi among others.

The saplings were planted on 700 acres of agricultural lands and included varieties such as teak, red sanders, sandalwood, banyan, Melia dubia, Haldina cordifolia, and rosewood.

2.) 3 September is celebrated as River Revitalization Day. To commemorate the occasion, this year, farmers across Tamil Nadu planted 2.5 lakh saplings on their lands. The trees were planted on the farms of 130 farmers within three days from 1–3 September.

3.) On 16 September, in memory of Maram Thangasamy, the Cauvery Calling team supported farmers in planting more than 1 lakh saplings. "Maram” Thangasamy, fondly known as "Tree Thangasamy," had only one aim in life. It was to plant lakhs of trees and spread awareness among youngsters.

4.) Cauvery Calling teamed up with the Rotary Club of Thondamuthur to launch the ‘Pasumai Thondamuthur’ project on 3 August this year, under which the farmers of Thondamuthur planted 100,000 agroforestry saplings in their own farmlands in just two months.

Cauvery Calling helped facilitate this by providing the farmers with 100,000 timber saplings, recommending the right choice of trees after analyzing local conditions and requirements, along with guidance on proper planting procedures.

Pollachi MP Mr. Shanmugha Sundaram, who attended the closing ceremony of the project, called Cauvery Calling “a pioneer and guide for the nation.”

Nine enthusiastic farmers were trained and hand-held to produce high-quality, organic saplings. To reduce the risk for the farmers, Cauvery Calling has entered into a legal agreement to buy back 100% of their sapling production at attractive market prices, ensuring significant profit margins for the farmers. In just 3 months' time, they produced more than 5 lakh saplings. Isha has already bought back 2.5 lakh saplings at ₹5/ sapling. Out of them, Chandra Reddy farmer from Thiruvalluvar district of Tamil Nadu already sold 1 lakh saplings and earned a profit of 2 lakhs in 3 months' time. This successful pilot has inspired many other farmers to keep aside one acre of their farm for producing saplings in the following year.

Farmers have also begun distributing saplings at self-run nurseries with Isha’s guidance and support since September. This will help Isha Nurseries to achieve this year's target to distribute 1 crore saplings. Also, Cauvery Calling’s largest nursery in Cuddalore is practicing 5S’s (sort, set in order, shine, standardize, sustain) of quality management effectively. This practice is being incorporated in all Isha Nurseries now.

Editor's Note: A long-term project of this scale and size cannot be accomplished without the consistent support of compassionate donors like you! Donate here.

Sadhguru answers various questions from the Karnataka media on #CauveryCalling and its...