The Rise and Rise of Velliangiri Uzhavan FPO

Just shy of a decade, Velliangiri Uzhavan is celebrating yet another milestone in its fledgling journey – a turnover of Rs. 17.7 crore for financial year 2021-22, a 26% increase in its year-on-year turnover and a 165% increase in earnings per share for the year. But there is much more to this farmer producer organization than its astronomical growth.

“Velliangiri Uzhavan is a revolution in Coimbatore,” says its dynamic Chairman Kumar, who is determined to steer the FPO to its next milestone – a turnover of Rs. 50 crores.

Kumar couldn’t be happier. A farmer from Thondamuthur near Isha Yoga Center, he has nurtured Velliangiri Uzhavan with his relentless commitment over the last five years, turning it into an institution that is truly of the farmer, by the farmer, for the farmer. But he humbly passes on the credit to his entire team. “There is a silent army behind the success of Velliangiri Uzhavan. I am only the face of it,” he shares. 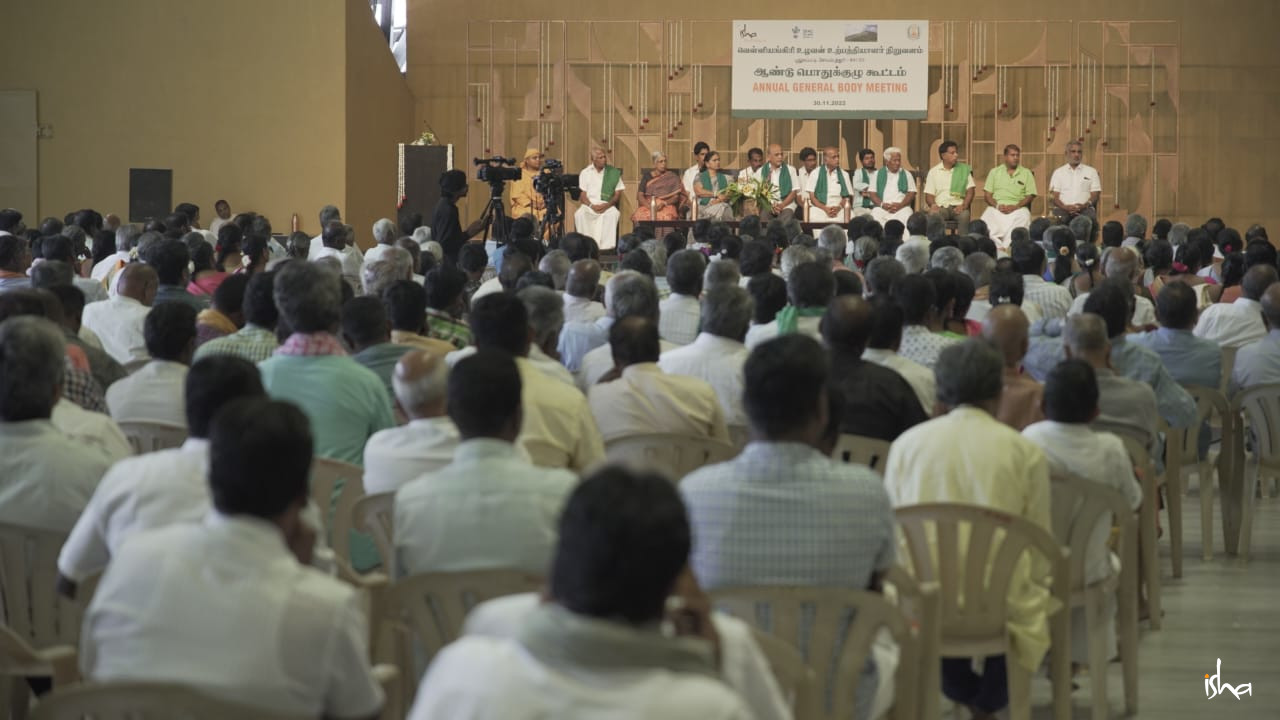 “What excites me about my role here is that since the farmers joined Velliangiri Uzhavan, they are benefiting every day and in every transaction,” he says enthusiastically.

However, the economic situation of Velliangiri Uzhavan farmers was not always so. For instance, Thondamuthur is a coconut country but the coconut farmers in the region were a dispirited lot.

“They were selling their produce through brokers who always gave them less than the market price. When the price was Rs. 40 per kilogram, the farmers would get a maximum of Rs. 34,” Kumar explains. The average produce per farm is Rs. 10,000 kilograms – a loss of at least Rs. 60,000 for every crop.

The vegetable farmers have a similar tale to tell. Apart from short-selling their produce, they had to pay a 10% commission to the private mandis (markets) in addition to transportation costs, all of which took a large bite of their profit.

Today, these are just bad memories for Thondamuthur farmers. “Not only have they stopped losing money, the transactions are transparent and hassle-free, and we don’t charge any commission,” says Kumar. “The bank transactions have greatly enhanced the farmers’ credit worthiness,” he adds.

With a total cultivation area of 5859 acres, Velliangiri Uzhavan’s 1063 farmers sold a bumper crop for 2021-22: 5621 tons of coconut, 7066 tons of coconut shell, 252 tons of vegetables and 2.7 tons of coconut oil. While prosperity of farmers is one of the primary objectives of the FPO, its larger and long-term focus is to transform the experience of farming itself, from being a heartbreaking profession into a heartwarming experience that is also sustainable and profitable. With the rapid degradation of soil, farming has become an untenable choice for the next generation. Velliangiri Uzhavan wants to change this. “We want to eventually transition to 100% natural farming,” Kumar says. Currently, 40-50 farmers are making the transition annually and they feel if these rates increase, the FPO could achieve its objective in 4-5 years.

Velliangiri Uzhavan is not an accidental success. It is a carefully designed ecosystem that has worked hard to succeed. Every process and system has been designed to support the farmer, to bring as much ease as is possible to the process of farming and marketing. “We offer agri-consultancy as a free service for our farmers. The consultants visit the farms and advise them on a whole range of issues from pest management to crop input to marketing. It has brought a great sense of relief and reassurance to the farmers,” says Kumar. Other initiatives of the FPO which have made life easier for the farmers include the FPO’s own input shop that offers very reasonably priced products and a drip irrigation dealership that installs the system without installation charges.

The farmers participate in knowledge sharing workshops, make use of exposure visits to successful farming models and are regularly updated on latest technologies and new government schemes which are beneficial.

Kumar’s own growth mirrors the meteoric growth of Velliangiri Uzhavan. “In the last five years, I have learnt so much,” he says with humility and gratitude. “I have worked with government, traveled to farms, learned about marketing, trained farmers and have even made presentations,” he adds. His calm and patient demeanor has been an asset in handling the multiple facets of a complex operation with great success – a consequence of the collective triumph of a community that is passionate and committed to creating a culture of cultivation that is joyful, healthy and prosperous.

Velliangiri Uzhavan has set a high benchmark for FPOs. It is Tamil Nadu’s foremost and among India’s most successful.

Last September, it was awarded the ‘Best Upcoming Farmers Producer Company’ award by the National Academy of Agricultural Research (ICAR - NAARM). It was also adjudged the ‘Best FPO’ by the Government of Tamil Nadu in 2021.

Kartik Cholpady Kamath
15 December, 2022
So heartening to read!
REPLY
POST
Keep in touch
Get the latest Cauvery Calling updates delivered to your inbox.