Harini, a Class 9 student, is turning heads with her ability to create beautiful dolls and artifacts using coconut tree waste, rope, canvas, fabric paint; Deebha enjoys painting landscapes with pastel colors. Read on to know more about the budding artists of Isha Vidhya, where art and craft play an equal role in the curriculum.

Art and craft play an equal role in the curriculum at Isha Vidhya, and students are encouraged to compete in numerous art competitions conducted at the school, as well as at the district, state, and national levels.

Read about Isha Vidhya students with an artistic streak, who have made their mark at school. 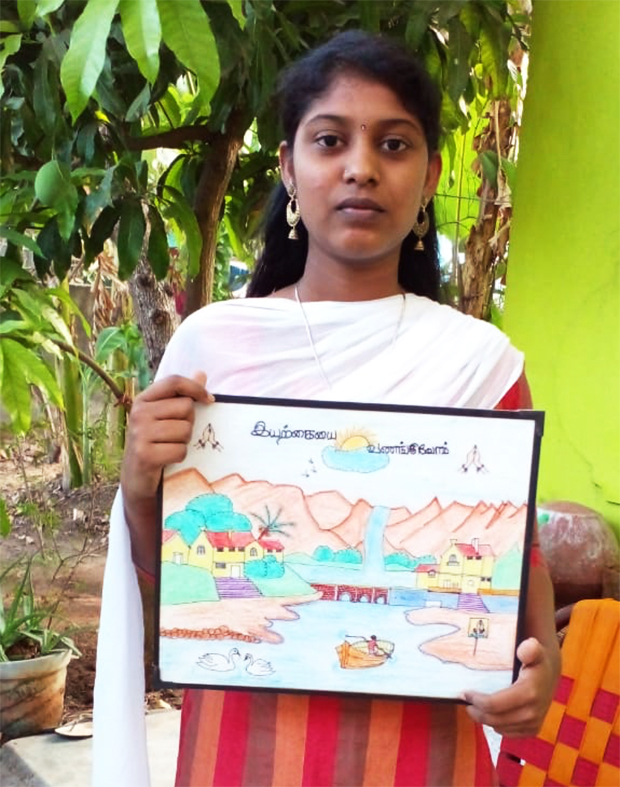 Deebha has been dabbling with colors since childhood despite the fact that no one in her family is artistically inclined, thanks to her encouraging parents. She enjoys painting landscapes the most and prefers to use pastel colors because she believes they give her drawings a more natural look. Naturally, the art and craft class is dear to her, and her favorite artist is Raja Ravi Varma.

Deebha has won awards at both the national and district levels in art competitions, and she was also chosen for the wall painting at Chennai Airport for the Swachh Bharat Abhiyan. This multi-talented student has also won awards in scientific and athletic competitions. She says that the numerous art competitions held at school as well as various other locations and the encouragement and motivation she received from her teachers have helped her hone her skills.

A Class 11 student at Isha Vidhya Villupuram, Deebha is studying on a merit scholarship for her above-average grades in Class 10. She intends to pursue further studies in Computer Science while continuing to nurture her love of painting.

“I love colors because it makes my pictures bright and my hands messy.” 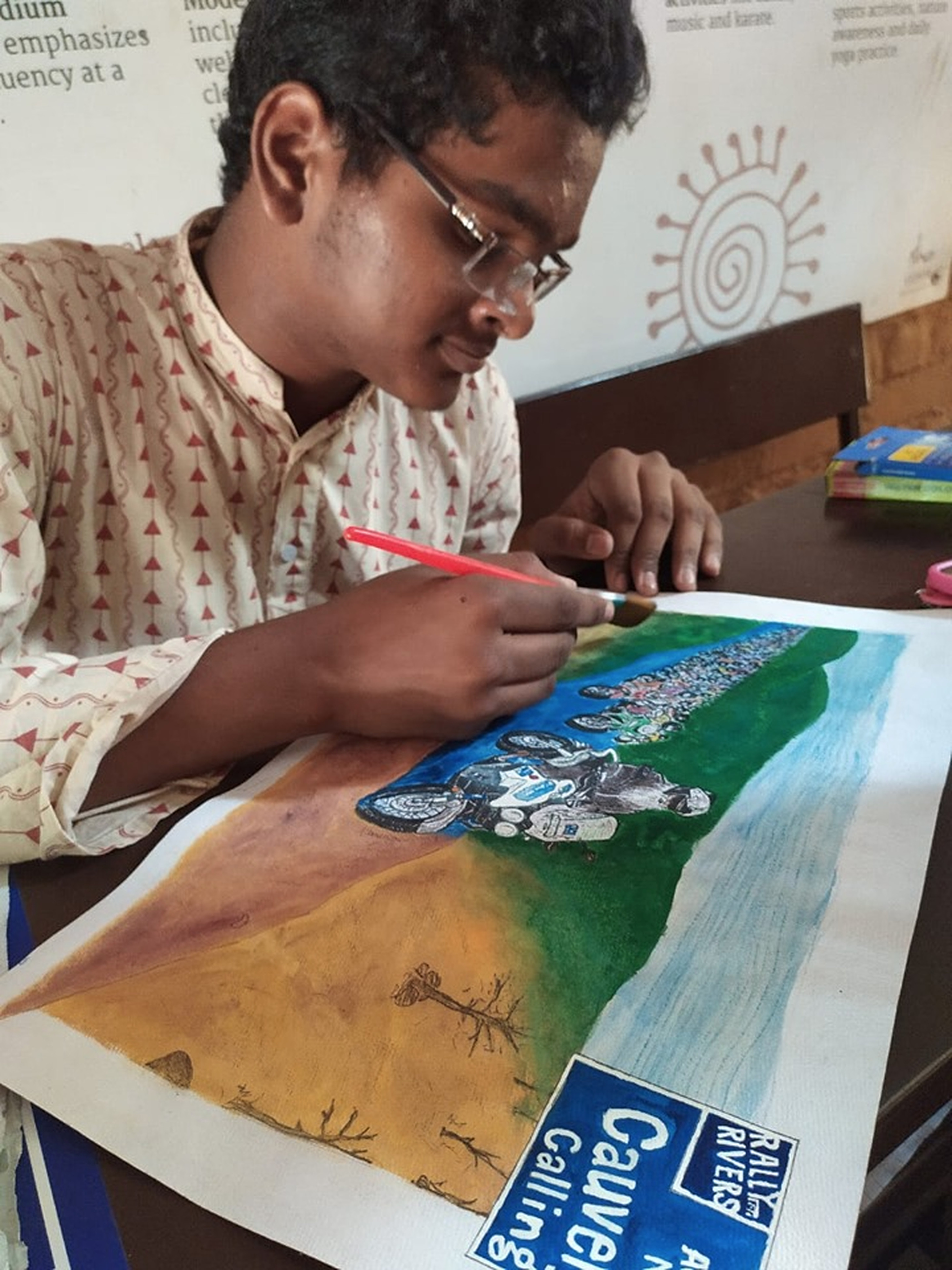 As a kid, ShreeVishnu of Isha Vidhya Coimbatore devoured cartoons on TV and then discovered R. K. Laxman and Kode BossLogic.

When he was in Class 8, he won the "Outstanding Award" at the 5th National Level Phegivef Drawing Competition, surpassing 52 other participants. This gifted artist has also won prizes at chess competitions.

ShreeVishnu enjoys the art and craft class because for him "every day is a new day with new things." Colors, on the other hand, he adores because they make his pictures bright and his hands messy.

In 2019, inspired by Cauvery Calling - an initiative by Sadhguru to revive River Cauvery, he created a widely appreciated painting with encouragement and motivation from his teachers.

ShreeVishnu is now in Class 12 and is experimenting and working on developing his pencil-shading skills. While he is still weighing his options for higher studies, he says that he will definitely continue to paint in the future.

“I am interested in designing because of Steve Jobs.” 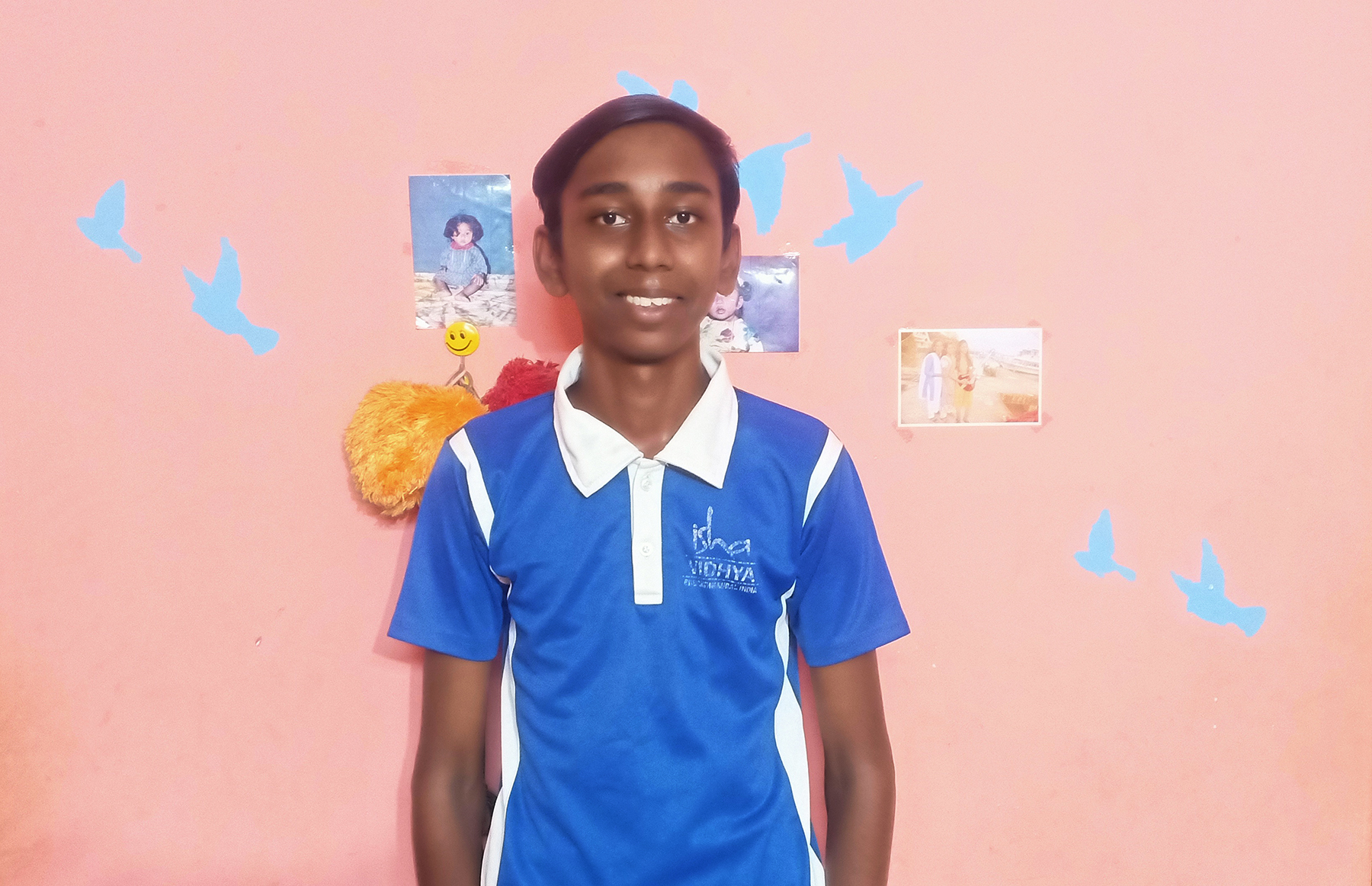 Suriya, a Class 11 student at Isha Vidhya Vanavasi, wants to pursue fashion designing after Class 12 because he was inspired by what Steve Jobs said about design: “Design is not just what it looks like and feels like. Design is how it works.”

As a child, Suriya used to enjoy drawing pictures along with his sister when at home, and when he started at Isha Vidhya, the art and craft class took over. He enjoys drawing because it relaxes him, and he enjoys the art class because it allows him to be creative. Suriya loves working with oil pastels and has won numerous awards at the school, district, zonal, and national levels.

When he won third place at the national level in the International Child Art Talent Contest, which included a cash prize of Rs.1,000, he could not believe it at first. His parents are especially proud of his achievements because there are no other artists in the family.

Priyadarshini, a Class 9 student of Isha Vidhya Cuddalore has been interested in art and craft since childhood. The daughter of a fisherman, she discovered natural colors when she couldn’t find any artificial colors at home. And now, she uses nothing else to paint.

She discovered her calling at Isha Vidhya in the craft class, where she learned to make artifacts out of newspaper and dried coconut tree waste, among other materials. She is inspired by both local art and Indian art forms that she learned about in the art and craft class at school.

A few years ago, her works that were displayed at Sadhguru's yoga program in Texas, US, helped raise funds for Isha Vidhya. Besides winning first prize in an art and craft competition hosted by noted film art director Suresh Selvaraj last year, Priyadarshini has consistently won prizes at inter-school art competitions.

She wants to take an art course after Class 12 to hone her creative skills, after which she wants to make and sell handicrafts to help poor students. Priyadarshini's parents are proud of her talent and support her.

Nitheesh, spellbound by the paintings on display at a museum in Kanyakumari, took to drawing and enjoys reproducing famous paintings. He is also influenced by artist Oviyar Maruthi. Nitheesh won first place in the Indian Talent Olympiad for a painting on "Global Warming," and third place in a Tamil Nadu Forest Department zonal competition for a painting on the topic "Save plants by saving birds."

Nitheesh, a scholarship student at Isha Vidhya Nagercoil is studying in Class 10 and excels in his studies. He aspires to become an IAS officer but says that he will continue to paint even after leaving school. His parents are supportive and encourage him to hone his skills. 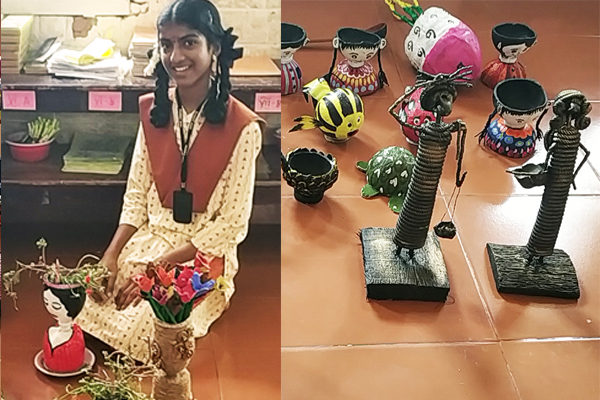 Harini, a Class 9 student of Isha Vidhya, Cuddalore, is turning heads with her ability to create beautiful dolls and artifacts using coconut tree waste, rope, canvas, fabric paint, etc. It is an inborn talent – there are no artists in her family and her father is a fisherman.

Harini began her creative journey in Class 2 with inspiration and support from her art and craft teachers who honed her inborn talent. This class leader and topper dreams of becoming an IAS officer.