First it was the Tsunami and now Thane. Puducherry had just recovered from the impact of Tsunami which hit in 2005 when in December 2011, cyclone Thane hit Cuddalore and Puducherry causing severe damage to the coastal belt.

First it was the Tsunami and now Thane. Puducherry had just recovered from the impact of Tsunami which hit in 2005 when in December 2011, cyclone Thane hit Cuddalore and Puducherry causing severe damage to the coastal belt.

In 2005, when the tsunami struck, Isha Foundation was quick to respond to the unprecedented and catastrophic death and destruction. From organizing relief camps, offering food, shelter, quality medical assistance and psychological relief to the victims through Isha Yoga Class, thousands of volunteers of Isha Foundation offered their support to the victims. A massive tree planting program was organized by Project GreenHands (PGH) that enabled the planting of nearly 25,000 trees.

This time around, though there has been not been severe loss of life, Thane has been a big blow to the economy of Puducherry and nearby coastal areas. Reports state that nearly 200,000 fully grown trees like cashew, coconut, casuarina got destroyed completely with just mounds of sand everywhere.

To revive Puducherry and to restore the green cover, Isha Project GreenHands in collaboration with the Education Department of Puducherry has launched a Green School Movement for planting 3,00,000 saplings.

Each school will be given a target of raising and planting 2,000 saplings. The children will be involved in all the nursery activities starting from sowing seeds, filling pockets, transplantation, watering, weeding, and maintenance of saplings. The saplings produced in each school through the Green School Movement will be planted in the school premises and will also be distributed to the children for planting in their houses.

This project started last year in Erode and Coimbatore districts with the planting of 1 million saplings, all by school children. This year, apart from Puducherry, the movement has been launched in Erode and Krishnagiri districts to plant 800,000 saplings and a similar program will be launched soon in Coimbatore also.

The Green School Movement grew out of PGH’s vision to initiate plant nurseries in schools. Through awareness programs conducted at various schools and educational institutions, these educational nurseries not only produce saplings but also spread awareness among school children about the environment and ecology. 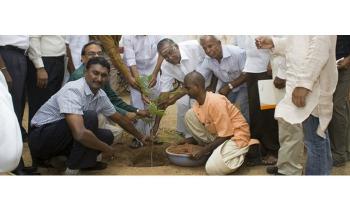 The Green School Movement is spreading in Tamil Nadu! Into its second year now, the Movement,... 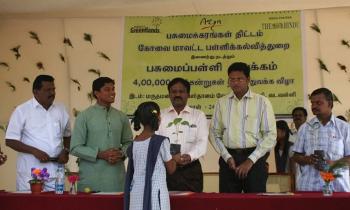 Project GreenHands organized a plantation function for school children and teachers in...