Project GreenHands is a social/environmental "culture change" initiative designed to educate and mobilize an entire population to plant 114 million trees to raise the green cover of Tamil Nadu back up to 33%.

What?
Project GreenHands is a social/environmental "culture change" initiative designed to educate and mobilize an entire population to plant 114 million trees to raise the green cover of Tamil Nadu back up to 33%.

How?
PGH is promoted through Isha Foundation's large network of volunteers and its yoga programs conducted throughtout the world. Additionally, awareness campaigns are held across Tamil Nadu to distribute saplings to those who pledge to care for them for 2 years, promoting viral expansion. PGH supports community involvement around sapling production and tree planting at every level of society, modelling adoption of organic agro-forestry as a pathway out of suffering.

Achievements thus far
In 2005, PGH planted more than 25,000 trees in tsunami-devastated coastal areas of Tamil Nadu. In 2006, PGH volunteers planted 856,000 trees in just three days, setting a Guinness Book World Record. By the end of the 2008 planting season, PGH had planted 7.1 million trees and introduced a newly designed model of agro-forestry among the farmer community.

Useful facts
Tamil Nadu is the size of Britain and has a population of 62 million. 58 indigenous species of trees are grown for fruit, medicine, shade, green manure, fuel (coppiced and grow back) fodder, fencing, timber (no value until at least 25 years old) and some cottage industries. Agro-forestry is a sustainable combination of crops, animal husbandry and trees. Trees sequester carbon 3 times as fast in the tropics as they do in temperate climates. Nurseries grow between 10,000 and 300,000 trees.

Social benefits
Increased understanding of interdependence with nature, PGH nurseries bring business employees together with self help groups, students and children, breaking down cultural divides, rebuilding community and generating pride in and "ownership" of the project. Many companies and NGOs are part of the project (47 corporate nurseries as of 2008) PGH rebuilds relationship with nature, rebuilds self sufficiency, reduces poverty and brings hope to "forgotten" rural communities through the trees, the PGH volunteers, games and yoga.

Relevance for companies and CSR
(corporate social responsibility)
We have a vast workforce of over 1M volunteers so it can roll out very fast at scale with minimum cost. It is social and environmental, covering sustainability education, community development, poverty and malnutrition reduction while being very climate chaos relevant with tropical trees sequestering 3 times as much carbon as trees planted in temperate climates. PGH trees are environmentally ideal as a global carbon sink, socially ideal as an initiative that develops project ownership and environmental responsibility in peoples who need trees for poverty reduction and land rehabilitation, and economically logical as PGH trees are between 5-10 times as cheap as trees planted in the US or Europe. Saplings cost 50¢ / 25p, trees cost 1$ / 50p. 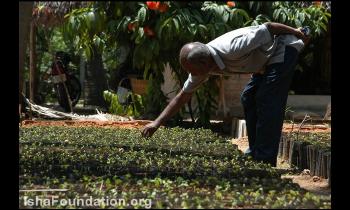 June 5, World Environment Day is special for Project GreenHands because every year, the...