Recycle Reduce Reuse – How you can help the environment

We produce 1.3 billion tons of trash a year. That’s more trash per minute than the weight of 7 loaded Boeing 747s! It's time to Recycle Reduce Reuse! Find out how you can recycle and reuse your trash to reduce the burden.

Cities and towns are home to approximately half the world’s population today, and that fraction is steadily growing. Countless challenges present themselves as urban populations increase, resulting in crowding and slums, water supply and power shortages, drainage, transportation, traffic, and above all, pollution.

A Planeload of Trash Every Minute!

Pollution is the result of many variables. While smog, air pollution, and water quality, get their share of attention, one pollution source that is largely ignored, though it often stares us in the face is solid waste. Solid waste is defined as non-liquid material that no longer has any value to the person disposing it. It is often called rubbish, garbage, or trash. Solid Waste Management (SWM) is usually the largest budget item for cities, particularly in developing countries, and one of the largest employers. Uncollected solid waste is often the leading contributor to local flooding, and air and water pollution, and can have an enormous impact on health, local and global environment, as well as on the economy. As countries urbanize, consumption of goods and services are increasing with disposable income, leading to more waste. Today, the world produces 1.3 billion tonnes of garbage a year. That’s more trash per minute than the weight of 7 fully loaded Boeing 747s! By 2025, the world’s garbage output is set to rise to 2.2 billion tonnes a year, particularly as India and China continue their rapid pace of urbanization and development. 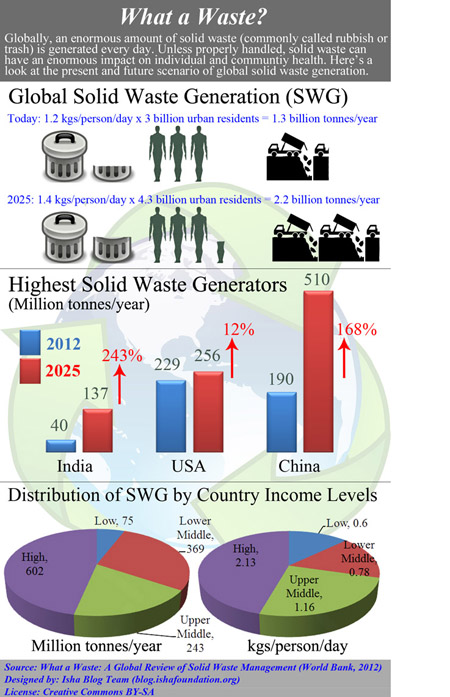 While higher income countries currently have higher per capita waste generation, they also tend to have higher waste collection efficiency, and encourage education programs, emphasizing the 3 R’s, reduce, reuse and recycle. The less fortunate economies generally only practice informal recycling due to lack of high-tech sorting or processing facilities. Moreover, the most commonly used method for waste control in lower-income countries is landfilling or dumping, with many of the dumps in the developing world being open dumps and unsanitary landfills, polluting nearby aquifers, water bodies and settlements.

Better administration and public infrastructure are an immediate necessity in lower income countries, and public attitude needs to change as soon as possible. Unless there is a shift towards a more responsible attitude, no enduring solution is possible. Public education that informs people of options to reduce waste and increase recycling and composting, as well as the necessary equipment to separate recyclables are a good starting point. There is also a need for the design of longer-lasting and reusable products. Pricing mechanisms, such as product charges, can stimulate consumer behavior by adding a cost assessment to the price of a product, tied to the cost of the desired waste management system. Municipalities can encourage people to form groups, segregate waste and process it at their end. Repairing, donating, selling and reusing products when possible, especially in the case of e-waste, is also essential. For example, only 5% of India’s electronic waste gets recycled due to absence of proper infrastructure and legislation. And last but not least, reusing long-lasting cloth bags instead of plastic is a feasible solution to rid cities of non-biodegradable plastic bags that are a hazard to life.

According to recent research, human beings were recycling and reusing objects, 13,000 years ago during the upper Palaeolithic age. Scientists have discovered stone artefacts that show signs of modification, meaning that one tool was recycled to create an entirely new one. Though this recycling may have been driven by convenience and efficiency rather than ecological considerations, it does show that human beings have the potential to make the most out of everything they use, provided we don’t succumb to unawareness and apathy.

Let us know if you have any ideas on reducing waste, and share them in the comments section below.

Our planet is losing forest at the staggering rate of a football-pitch sized area every...

Money grows on trees! Or that's what some recent studies say, after they actually put a... 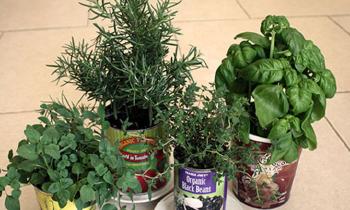