World Environment Day: An Everlasting Shade of Love and Joy

A few Isha volunteers climbed up Gnanagiri to do yoga together, and came down with a determination to transform this bare brown hill into a lush green forest. Were they successful?

Leading up to the World Environment Day, yesterday we brought you the extraordinary saga of a retired couple who transformed a barren land into a mini forest based on advice from Isha volunteers. Now, in this post, read how some gutsy Isha volunteers got into the action themselves!

A few of us from my village, Karunguzhi, did the 7-day Isha Yoga class together in 2008. The experience of the class was so amazing that we didn’t want it to end, we didn’t want to leave. We figured that the only way to retain and enhance our experience was to do the Isha Yoga practice regularly. “Why don’t we go up the local hill in the morning together at 5 am, do our practices, and come down by 7:30 am?” proposed Krishnamurthy anna excitedly. The idea instantly appealed to all of us and we decided to experiment with it.

The next day, at 5 am sharp, all of us were set and ready to go. Soaking in the coolness of the misty dawn, we silently climbed up 1 km to reach the top in 15-20 minutes. It was so wonderful to do the practices together on the hill top that we unanimously decided to do this every day.

Then something struck us as we climbed down. We realized that though it was only 7:30 am, it felt very hot. The sight of aged pilgrims trudging up the steep hill in this heat to reach the Ranganathar Swami temple at the top, was heartbreaking. Before splitting up to go to work for the day, we decided to meet in the evening to discuss the matter further.

I don’t remember who among us initiated it, but that evening we decided to turn Gnanagiri into a forest. Whether it was the hangover of the Isha Yoga class, or the exhilaration of our practices together, or the sight of those pilgrims or Sadhguru’s resonating appeal to us to grow trees – we don’t know. But something triggered us to take up this staggering task.

How to Dig Up a Mountain?

Within a few days, we bought 600 saplings, collected tools, rolled up our sleeves and started to dig up the hill to plant these saplings. That was when the reality began to sink in. The hill was too rocky for the simple tools and hands of just ten volunteers. “Why don’t we involve the forest department, NSS, and schools?” Jayanthi suggested. Yes, we thought and proceeded to go in different directions to find more “green hands.” Soon enough, people from the forest department were there to guide and facilitate, while NSS students and local men and women shared in the toil. It was so wonderful to see how we could plant these saplings within just a few months.

How Do You Water 600 Saplings on a Bare Hill?

We were really naïve, and new to planting at the time. So initially, out of our enthusiasm to see the saplings grow, we would carry water in small pots in the morning, do our practices, water the saplings, come down and get busy with our regular work. Of course, this didn’t have much impact – the saplings were weak and unhealthy, and we found ourselves feeling exhausted throughout the day. Soon, we bought a motor to pump water up from a bore well at the foothill, laid pipes and hired a person to water the saplings. The saplings also responded well to this plan – they were invigorated and started to grow well. Whoever came to see them were in awe and wondered how with just 10 volunteers we could raise 600 saplings. As we were filled with the joy of seeing these lovely little plants, we decided to grow another 600 saplings within six months.

Until now we had been using our personal money for everything to buy saplings, motors, pipes, for the construction work, etc. We pooled in our funds to pay the salary of the labor, and the electricity bill. But now it was apparent that we couldn’t go on like this, especially if we wished to scale up. So as a first step, we spread the word among Isha volunteers that we needed help – and it worked.

It was truly overwhelming to see that soon we had a team of 50 Isha meditators from our area. They, too, inspired by Sadhguru’s appeal, were eager to do anything within their means. Some people gave money and others gave their time and energy. We made it a rule among all the volunteers to go up the hill in the morning and do our practices. At 7:30 am, 4-5 volunteers took turns to go around and check the health of all the saplings. With all their support, there were no more constraints and scaling up happened effortlessly.

Though many local villagers also joined us in the effort, a few villagers thought we may claim the land as ours if we continued to be seen as owners of the saplings. They began to raise local bodies against us. Another problem arose when some loose cattle took notice of this new abundance of food and started devouring our plants. But the worst tragedy was when a few people under the influence of alcohol broke the water pipes!

So we again started carrying water pots, but the difference was that we were now not 10 but 50! We hired a few more people for night shifts to water the plants and protect them from cattle and local people. It took an entire week for the labor to water each of the 1,000 + saplings. And after a week, the cycle would begin afresh, as each sapling cannot survive for more than a week without water. So we ended up continuously carrying the water up every day. We had to do this just for the next one year as most trees don’t need any external water two years after they are were planted. It was tiring work, but no one seemed to mind it – in fact, many shared that just the thought that the plants would die if we didn’t give them water was too heartbreaking for them – such a connection each of us developed with those plants.

Today, nine years later, the hill looks like small forest with trees of heights 6 feet to 15 feet. Because of the current drought situation in Tamil Nadu, some of them are struggling to survive, but if it rains this year, it will look like a real forest in another 2-3 years.

Our green team doesn’t only practice together – we play together, holiday together, celebrate together and visit the Isha ashram together to re-charge. Each time we go to the ashram, our bond, our commitment, our joy finds a deep connect when we see how silently the same effort is happening there, too. Earlier when we used to climb the Velliangiri hills, it used to be so barren and hot. Now, it is totally green, full of tall trees. Many other volunteers like us brought the glorious shade of Velliangiri Hills back. Struck by the same compassion of Sadhguru, we had the fortune to turn around our Gnanagiri also.

We all feel so close to these trees. We know each one of them personally – what this tree needs, how much water, how much sun, space, time to grow – everything. What could give us better joy in our lives, I wonder! I know the joy of being with a tree – if I go to Pungai tree in a hot summer day at noon, it still feels so blissfully cool. And I know the joy of raising a tree. Personally for me, this has been one of the most enriching parts of my life.

Sadhguru’s ability to inject his passion for life into people has been the driving force of Isha’s activities. Thousands of fired-up volunteers have set out joyfully to take on seemingly impossible tasks in the world and come out shining. And yet, the most difficult task is not out there, but within ourselves. For example, with regards to Isha’s environmental initiative, Project Green Hands, Sadhguru says, “The first seven years we spent planting trees in people’s minds, which is the most difficult terrain! Now because that’s been done, it’s much easier to transplant those trees onto land.” 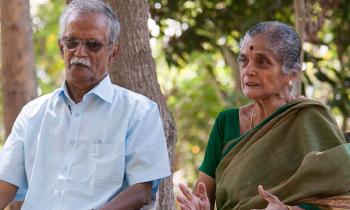 This amazing story of a retired couple who raised a mini-forest on a barren piece of land out...