As India prepares for its 73rd Independence holiday, water scarcity threatens to dampen celebrations in the coming years. Read on and see if the spirit of India’s freedom movement can be harnessed for a different kind of independence..

At Independence in 1947, India’s population hit 33 crores and by August 15, 2019, the population will exceed 137 crores. This means four times the number of people are sharing the same water resources. As India anticipates its celebration of 72 years of Independence, this is an apt occasion to reflect on Indian achievements in various fields, a testimony to the genius and spirit of Indians. Now, as the nation’s water scarcity becomes impossible to ignore, this acumen is needed more than ever, to free countrymen from the gravest crisis of our times.

India is finally finding its destiny. Once the largest economy on the planet, it was left crippled after a 200-year British occupation. The first national priority after Independence was to alleviate poverty and institute social reforms. Poverty dropped from almost 80% to 22%. Literacy increased by 62%. In 2009, all young people could pursue education as a fundamental right, and India is feeding its school children as a national mandate. Since 1947, India has thrived and not just survived.

Since Independence, the entire world is witnessing India’s growth. It will continue to remain the fastest growing major economy in the world in 2019-20, boasts the 4th most powerful military in the world, and is the most efficient producer of solar energy.

The world's second-largest internet market, after China, belongs to India. Google and Microsoft have Indians at their helm. ISRO, India’s space program, is peerless and launches more American satellites into space than America itself.

India is now one of the safest habitats in the world for tigers and has more than doubled the tiger population since 2006. But soon, even the tigers will not be safe from a perilous circumstance that is endangering life in this country.

A Not So Invisible Threat

Today, India faces a new threat, which is neither imperialism nor terrorism. Today, India faces the threat of depleting water resources, and as a great equalizer, this threat will spare no one. In fifteen years, India will only have half the water it needs for survival.

Last year, a report from NITI Aayog, an Indian government think-tank, warned that by 2020, 21 Indian cities, including Delhi, Chennai, and Bengaluru, will run out of groundwater unless extreme and immediate measures are taken. 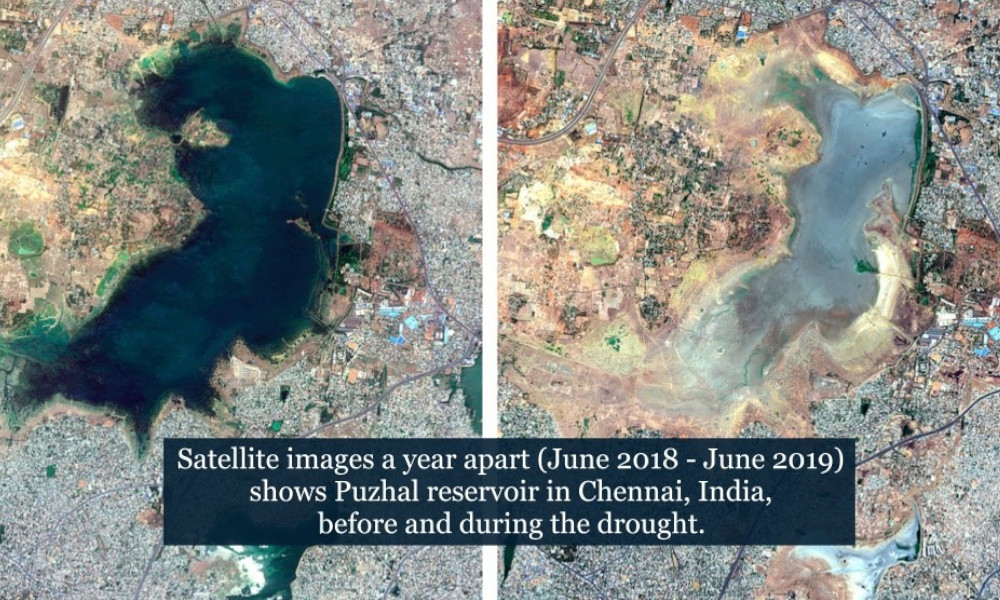 A shortage of water puts severe stress on civility, leading to unrest or even wars with neighbors. Water stress is already at India’s doorstep.

All over India, people are suffering from water scarcity. This summer a man was beaten to death in a violent dispute over water and a woman was stabbed by her neighbor. In Madhya Pradesh, police are being sent to guard water tankers because of a recent beating of a water tanker driver and several other violent disputes. An elderly woman and her grandson were assaulted in Uttar Pradesh for taking water from a well. In Ranchi, a man attacked six people with a knife.

IT companies in Chennai are telling people to work from home. Residents line up at municipal wells to get water based on a lottery system. Chennai Metro Water tanks cost Rs. 700-800 with a waiting period of 25 days while private tankers are priced at Rs. 4,000-5,000 and even these have waiting periods growing almost as long.

The water crisis effects all of us, regardless of caste and creed. Even for the wealthy, the day of zero water is an absolute possibility. Take the situation in Cape Town, South Africa as a modern-day example.

After three years of drought, Cape Town’s supply dams are about to run dry, and its citizens live in fear of ‘Day Zero,’ the day that water taps across the city will run dry. The South African city has been facing a water crisis since early 2017, when the municipal government began pleading with residents to conserve water. 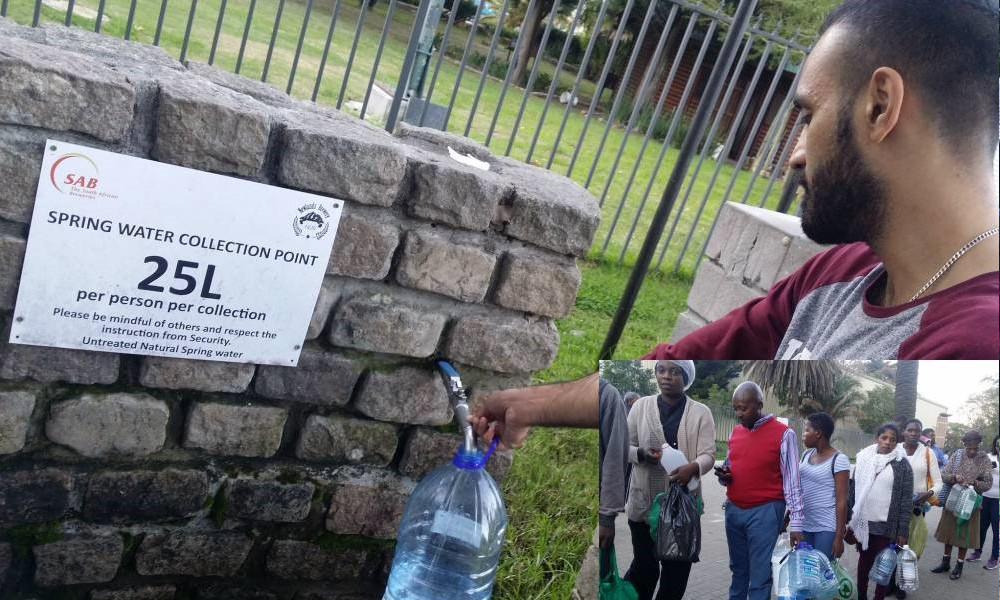 Water restrictions were imposed. Each person endured long lines at water distribution points and was limited to 50 liters of water per day, to be used only for drinking and essential means of survival such as cooking, bathing and toilet usage. The police force was tasked to snoop out rule breakers, patrolling the streets and conducting intrusive inspections at residents’ houses to probe water usage.

Protests sprang up across the city, drawing attention to the inequities associated with the privatization of water. Black citizens took to the streets in protest as water supply had been turned off to their houses, yet the hotels owned by rich white men continued to have water free flowing.

As the situation got worse, people also turned to faith, gathering in masses on hilltops praying to God for the heavens to open up with rain water.

This is a living reality for Cape Town, which is part of a democratic republic, and has a population of 45 lakhs. Imagine a similar crisis taking place in Bengaluru, with a population of 130 lakhs, or all over India with its 137 crore people!

How Did We Get Here?

India’s water shortage is a result of a vicious cycle that happens between river, soil, tree cover and rainfall. In an ideal environment, the rain falls, and due to vegetation, is absorbed by the soil. Here, it is held as groundwater throughout the year. These underground aquifers help feed water into the river and keep it flowing even after the rains have ceased. In this process, vegetation plays a crucial function.

Tree cover ensures the soil is porous enough to hold the rain water. Without it, when it rains, devastating floods sweep across the land, causing soil erosion. When the rains stop, one is left with a drought – a dry riverbed and a nutrient deficient landscape unfit for farming. 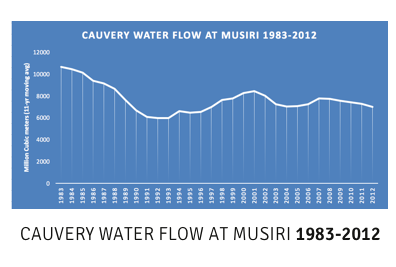 There was a time in India where the water stores were just below the surface. Yet, now in Chennai, people are forced to dig borewells that are more than 1,000 feet deep. Around the globe, we are taxing water resources beyond what the Earth can supply.

It will take a people’s movement to push India into a water secure future. Mahatma Gandhi once showed that a revolution is possible with non-violence. Now India has another great challenge to come up with its own unique solution for water scarcity. One that can be an ecological and profitable model for the rest of the world. 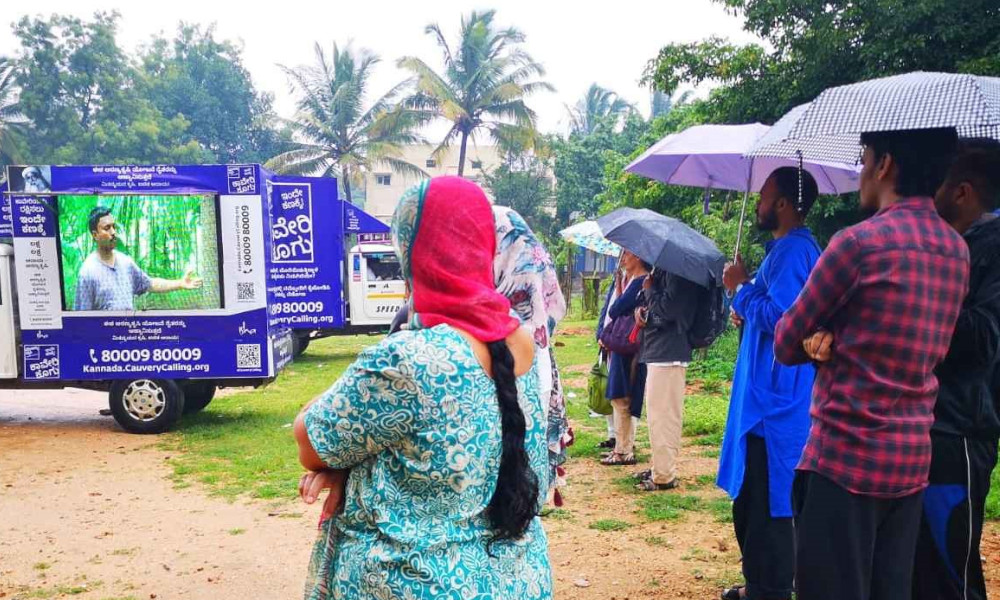 The Cauvery Calling campaign is an effort in this direction. It aims to revitalize Cauvery River by bringing green cover to 1/3 of the Cauvery River basin, while increasing the income of farmers in the region through agroforestry.

We invite you to be part of this movement. In the world’s largest democracy, the answer to this problem lies in the action of each of its citizens. Water does not discriminate. Instead of dividing into factions to fight for water, now it is time act as one nation and strive for a common cause. 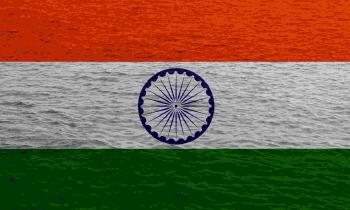 Indian Independence was celebrated on the banks of a river. Today, India’s rivers have...