Soil is the Real Wealth of the Nation

India’s soil is depleting at an alarming rate. This will lead to a drop in nourishment levels and water crisis. It’s time for Action NOW!

Sadhguru: India has about 160 million hectares of arable land. But nearly sixty percent of this soil is labeled as distressed soil. That means in another twenty five to thirty years’ time, we may not be able to grow the food that we need in this nation.

India has had many achievements: our space scientists are sending rockets to Mars and to the Moon; massive business developments and engineering feats have happened. Among all these, the most incredible is that without any technology, just with traditional knowledge, our farmers have been feeding over one billion people. This is the greatest achievement in the country.

Soil in the Cauvery basin is disappearing fast, and this is pushing our farmers over the edge. This video looks at the dire situation, and how we can reverse this. #FREEINDIAFromWaterCrisis #CauveryCalling
Plant trees at https://t.co/Qml0YbeQqH pic.twitter.com/ZpwwyWp4mV

But unfortunately, we have pushed the farming community to the wall, where farmers do not want their children to go into farming. On one hand, we are losing the quality of the soil, and on another, farmers are not putting their next generation into farming. This means in another twenty-five years, we are definitely headed for a major food crisis.

When there is no water and food, the level of civil crisis that will happen will demolish the nation in many different ways. People from those rural areas where water completely runs out are going to migrate in large numbers into urban centers. This is not far away. With no infrastructure, they will sit on the streets. But for how long? When there is no food and water, they will break into homes. I am not some kind of a doomsayer, but in the next eight to ten years, you will see these situations unless we do something drastic right now.

Rich Soil – The Most Precious Gift

The only source of water we have in a tropical nation is the monsoon. The monsoon comes down upon us over a span of forty-five to sixty days. This water that comes down in sixty days, we have to preserve it in the soil for 365 days to feed the rivers, lakes and aquifers. There is no way we can do this without substantial vegetation.

You must understand what the wealth of a nation is. It is the shit and the leaf! For the next generation, the most precious thing we can give is not business, money or gold – it is rich soil. Without rich soil, there is no question of water.

If you take a cubic meter of soil in India, the number of species of organisms found in it is the highest in the world. So even though the soil is depleting, if you give it a little helping hand, it has the complexity of strength to bounce back. Because of a history of rich vegetation, we have so much life embedded in the soil. It is so fertile that we have farmed this same land for over 12,000 years. But in the last forty to fifty years’ time we are making it into a desert simply because we have removed all vegetation.

How the Soil Impacts Health

India’s soil condition is so bad that the nourishment levels are going down in a disastrous way. Particularly for Indian vegetables, it has dropped thirty percent in the last twenty-five years. Everywhere else in the world, doctors are telling people to shift from meat to vegetarian diets. But in India, doctors are advising you to shift to meat. When the world is making an effort to shift from meat consumption to vegetarian ways of living, we who largely lived as a vegetarian nation, are trying to shift to meat because there is not enough nutrition in the food that we consume.

This is simply because we have not taken care of the soil. The micro-nutrient content in the soil has gone down so dramatically, over seventy percent of our children below three years of age are anemic today.

If you go into a forest and pick up soil, it is full of life. That is how soil is supposed to be. If the soil strength weakens, our bodies will weaken – not just in terms of nourishment, but in a very fundamental way. This means the next generation we produce will be less than us. That is a crime against humanity. Our next generation should be better than us. If they are worse than us, then we have done something fundamentally wrong. This is happening to India in a huge way, because the soil is losing its strength.

Before 1960, India had many famines. Some of them took the lives of 3 million people in a matter of just 2-3 months in the summers. We will once again go back to that kind of situation if the rivers dry up and soil depletes. If we don’t do the right things now, this land will not sustain people in future.

It is in this context that I launched Cauvery Calling. We are looking at supporting farmers to plant 242 crore trees in the Cauvery basin, which is nearly 83,000 square kilometers in area. This will cover one third of the basin under shade. The amount of additional water retained in the Cauvery basin will be around 9 trillion liters. This is more than 40% of the water that is actually flowing in the river right now.

The only way this can be done is by shifting farmers to agroforestry and tree-based agriculture. We have conducted small-scale demonstrations where we have converted 69,760 farmers into agroforestry and within five to seven years, their wealth increased by three hundred to eight hundred percent. Once we show this as an implementable large-scale model in the Cauvery basin, it can be replicated for other rivers as well.

This is the time to really take action. We can very easily reverse the whole situation if a sustained effort happens for another ten to twenty-five years.

Editor's Note: Cauvery Calling is a campaign to support farmers in planting 242 crore trees and save Cauvery. This will increase water retention in the basin, while improving the income of farmers five-fold. Contribute to plant trees. Visit: CauveryCalling.Org or call 80009 80009. #CauveryCalling 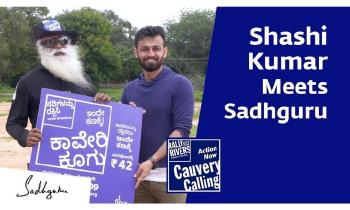 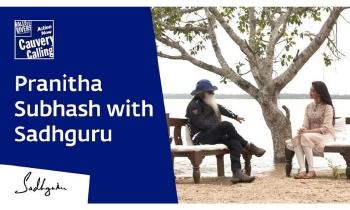 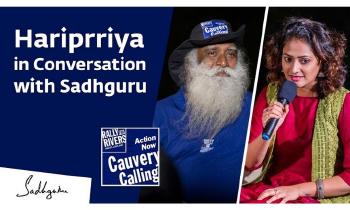