Mumbai-based dentist Aditya Sahu recounts his journey with Isha, and shares a fascinating account of his recent 1260-kilometer run from Mumbai to Coimbatore to raise funds for Isha Vidhya.

Dr. Aditya Sahu’s vibrant and serene presence doesn’t give away that he just ran 1260 kilometers in 27 days. For nearly a decade, Aditya has been running to raise funds for Isha Vidhya. Though he speaks very gently, Aditya is a true force of nature. After overcoming debilitating depression in early adulthood, he completed his degree in dentistry and moved to Mumbai. Initially, running gave him a sense of being part of something larger. 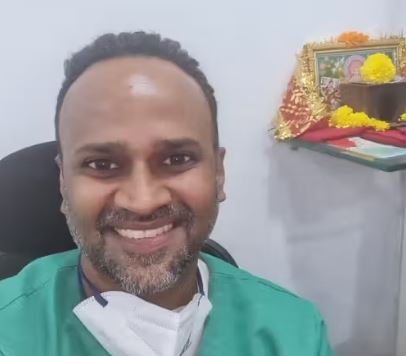 Aditya shares, “I started running because it made me feel connected with the universe, and that gave me answers.” This connection likely turned out to be more profound than he could have ever imagined – ultimately connecting people and giving children brighter futures. He did the Inner Engineering program in 2011, and after the program, he wondered, “Why not run and raise funds at the same time? It adds purpose to the entire running activity. I started with the Mumbai Marathon. And in 2015, I climbed Stok Kangri mountain, and completed a 72-kilometer run in Ladakh.”

In the most recent of these efforts, Aditya took up a new challenge and embarked on a run from Mumbai to Coimbatore.

In 2021, Aditya was busy with his newly opened dental clinic. Initially, the plan was to summit Mount Everest – a fitting goal for someone who had already completed two Iron Man triathlons (where participants swim 3.86 kilometers, cycle 180.35 kilometers, and run a marathon, all in one day). Unfortunately, the ongoing pandemic threw a spanner in the works, and it wasn’t possible to travel to Nepal to make the climb. In fact, travel restrictions made even general running quite difficult.

Aditya explains, “Lockdown restricted a lot of activities, and I had started a new clinic, so I got busy with that. Another thing was that my yogic practices were not happening in the ideal way. But any sportsman goes out of form – so I knew this would turn around. And somewhere in October, my energy started flowing beautifully.”

Though the Himalayan peaks were off-limits, a new peak was emerging on the horizon.

“In October, I came to the ashram for a day, and I felt it was Devi’s call. I went to Linga Bhairavi, and after that, when I got back to Mumbai, I woke up with this thought of walking from Mumbai to Coimbatore to raise funds.” With newfound energy and direction, Aditya started preparing for the challenge.

Rising to Any Challenge 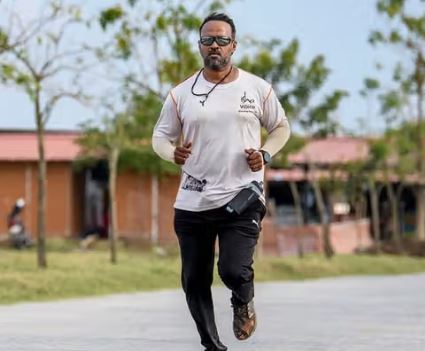 People around Aditya were a little anxious about the fact that he would be running alone, on roads, and in unknown places. He remained undeterred and committed to making this journey happen. “I was not prepared body-wise, but energy-wise, I was really in a good state because I know I’m fearless, and I can adjust to any situation. I can stay anywhere, I can eat anything, so I just backed myself to do this.”

As one might expect for such a massive undertaking, some things weren’t that straightforward. Aditya began his journey with a large backpack, but the burden of extra weight caused some physical issues. “I wasn’t able to run that much. In Mumbai, I damaged one of the nerves in my knee, so I decided to reduce the weight. My plan shifted more to walking and jogging.”

Within a week, Aditya was hit with a stomach bug and a high temperature, only for him to bounce back the very next day and run 40 kilometers. “I had not done a multi-day event before. I’ve done single events like a marathon or an Iron Man, but the human body adapts really well.”

Friendly Encounters on the Way 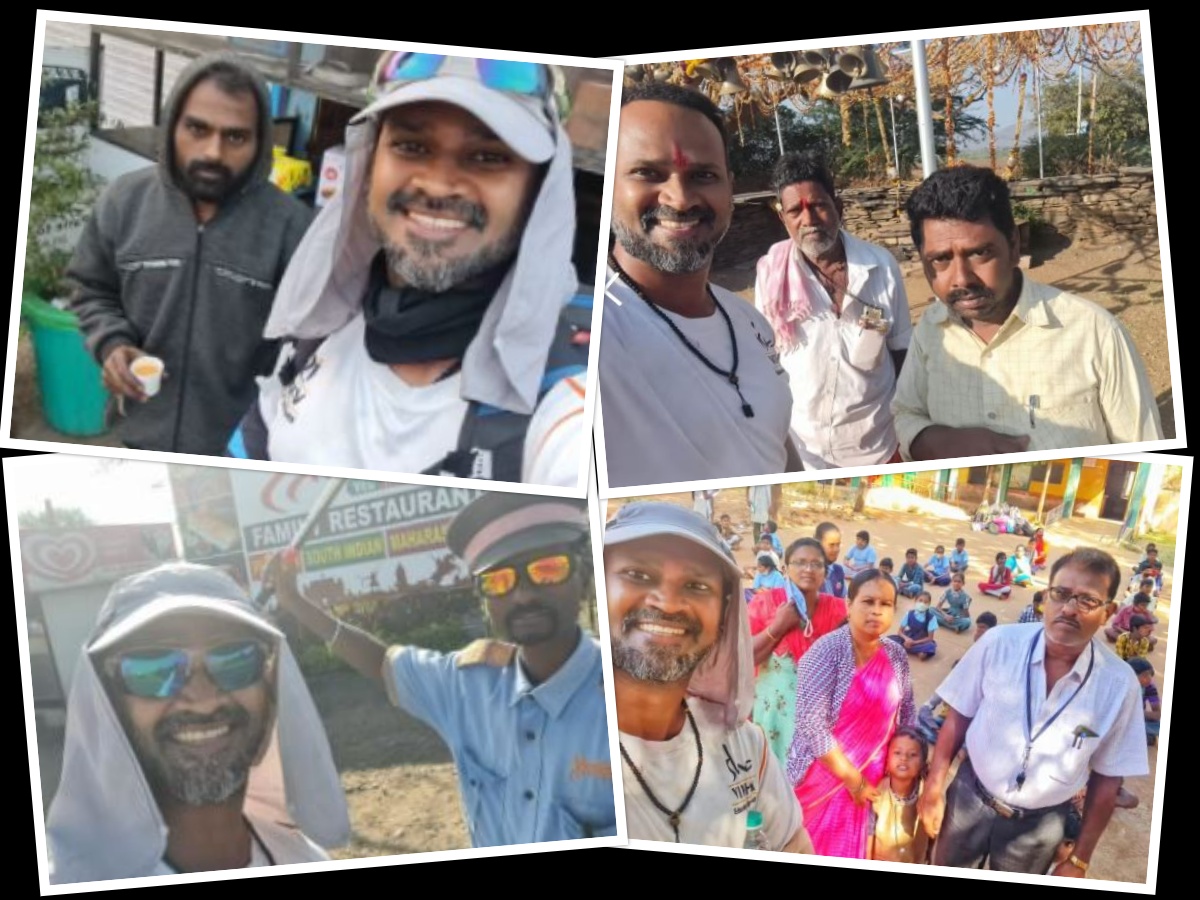 The run wasn’t all challenges and pains. Aditya’s bright approach and warm presence seemed to have drawn many light moments on the way.

“I feel the universe is my friend, and that’s how I met some really nice people along the way.” From singing farmers to generous truck drivers and servers offering free tea upon hearing about his endeavor, unexpected delightful encounters kept occurring. Aditya shares, “Somewhere in Maharashtra, there were men sitting on the corner to draw in customers to restaurants. But one of them was doing a robot dance, and he was actually so passionate about his job. I found it really inspiring, so I took pictures with him and spoke to him.” 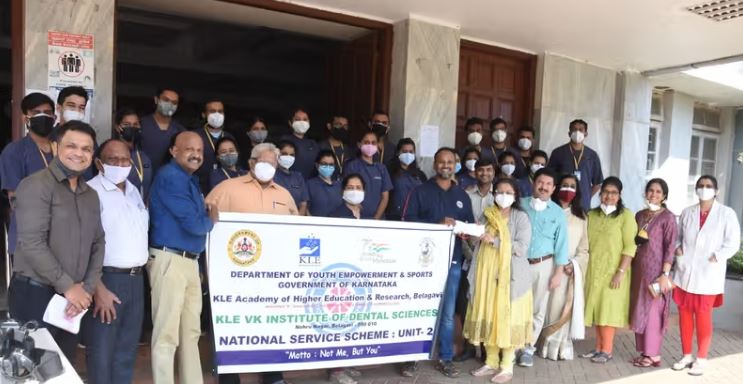 Throughout the entire run, Aditya kept up a relentless pace, starting at around 40 kilometers per day, occasionally pushing to 50 kilometers, running for eight or nine hours per day. As the journey pushed on, the distance per day came down a bit to 30 kilometers. Thirteen days into the run, he took a break. Aditya was warmly received by his alma mater in Belgaum, where he had studied dentistry.

His efforts were not only supporting the students of Isha Vidhya but also inspiring those from his old college! “I took a day’s break because the college wanted to felicitate me. They are also raising funds for the Isha Vidhya kids. They are very proud of me,” Aditya says.

After 27 days, Aditya concluded his run with a triumphant arrival at the Isha Yoga Center.

Though it wasn’t possible to summit Mt. Everest at this point, Aditya was able to scale peaks of a different kind, which he calls the “Himalaya within.”

Aditya explains, “The Himalayas within is when you come to know more about yourself – how your body can adapt to situations, how you can cope mentally with situations and with being in a different place every day. Everything kept opening up for me in a different way, on a daily basis. You come to know your strengths, how far you can go, and how far you can raise the bar. That was actually an eye-opener for me – I got to know myself better.

Editor's Note: There are many ways to support the children of Isha Vidhya. Find out more on ishavidhya.org