Siblings who study in the same school often act as a beneficial influence for each other. For many, it is like having an ally around and for others, it proves to be an uplifting experience as they inspire each other to push their boundaries in academics, sports and other activities.

Studying in the same school creates stronger bonds between siblings and inspires them to improve their performance in more ways than one. The moments shared at school make studying and schooling more enjoyable and memorable for them. Teachers often employ the ‘sibling’ card to encourage students to do better.

Read stories of siblings who have benefitted from studying together at Isha Vidhya. 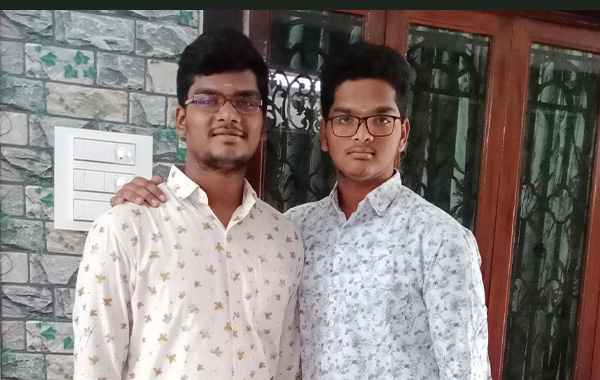 Prithvi, the elder sibling, says they often dozed off on each other’s shoulders on the bus rides from school.

The boys were so much in sync that their teachers couldn’t find much difference between Prithvi and Sreevishnu – not just a striking resemblance in looks but also their interactions with teachers and peers.

Their parents sent both children to the same school because they liked the discipline the school instilled in their first kid and wanted the same for their second one, too.

Besides being good in studies, both brothers won numerous prizes in art, writing, etc., and were school pupil leaders too.

While Sreevishnu is still considering various career options, Prithvi has completed B.Sc in biotechnology from Sri Krishna College and will now pursue his Master’s degree. 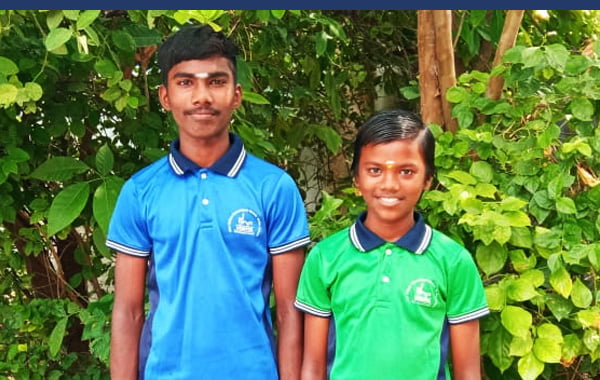 P.T. Perumal and Annamalai of Isha Vidhya Vanavasi are ardent archers. It all began when the older Perumal chanced upon some students practicing archery at the school campus and tried it for fun. It soon became a serious pursuit and he went on to win numerous prizes at the district, state, national, and international levels.

Annamalai also took to archery because he was inspired by Karthikeyan, another award-winning archer from the same school. He too went on to win prizes at the national and international levels.

Though their parents, who are uneducated, couldn’t afford it, they wanted their sons to study well. Their dream came true when their children joined the Isha Vidhya school with scholarships. For them, the nutritious midday meal was also an added attraction.

The siblings are inseparable – they walk to school together, meet at lunch, and constantly strive to excel for each other’s sake.

While Perumal who is now in Class 11 has set his sights on becoming a chartered accountant, Annamalai is in Class 8 and wants to pursue engineering. 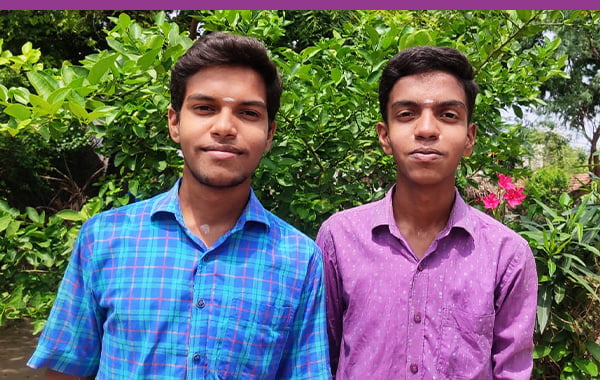 Pradeep, who’s now in Class 12 at Isha Vidhya Erode, reminisces the bus rides with his elder brother Prawin. Being an introvert, the rides with his brother gave him a chance to open up. Prawin’s classmates became his friends and they teased him and guided him on those fun-filled journeys.

Their parents sent them to Isha Vidhya as they were keen that both their boys receive similar education.

When Prawin realized that Pradeep emulates him, he worked harder to raise the bar for both of them. This ensured that both of them did consistently well academically with Pradeep topping the school in Class 10.

Prawin is now pursuing a diploma in mechanical engineering at Kongu Polytechnic College while Pradeep aspires to pursue B. Tech in Information Technology and enroll for a Master’s degree at IIT Madras.

Motivated to work harder to inspire 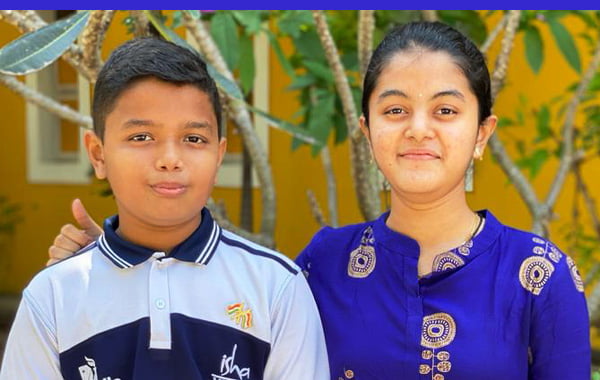 Jayanisree was a class topper and class leader – perhaps an outcome of her consistent endeavor to inspire her younger brother Ranadeep to emulate her. She feels happy that her brother is studying in the same school and has the chance to experience all the programs that she thoroughly enjoyed at Isha Vidhya Argonda.

Ranadeep was motivated to match his sister’s achievements, especially when his teachers showered praises on Jayanisree. They both felt happy for the extra time they got together while traveling to school and during lunch breaks.

Their parents, who are employees of Apollo Hospital, were keen to send their children to Isha Vidhya as they liked the environment and the programs the school offers. 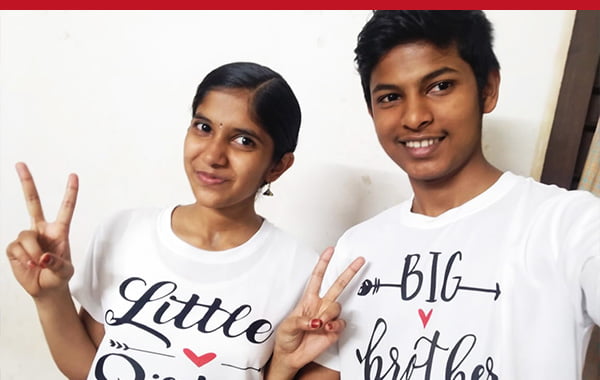 Alumni Abisheik and Atkshayapon were keen on athletics and worked in tandem to outshine each other when they were in school together. Their efforts helped them touch new heights of success – they both won gold medals at the SNS junior athletic meet in the high jump and many other prizes in athletics.

The siblings found comparisons made between them by their teachers at Isha Vidhya Coimbatore encouraging. Quite naturally, their favorite was the P.E. class, and then science.

Besides sharing lunch and traveling to school together, the siblings also had fun going for zonal meets together. They say being in the same school made them feel they could meet one another at any time.

Both are good in studies but have different career goals. The older Abisheik is inspired by Elon Musk and is pursuing mechanical engineering at Sri Ramakrishna Engineering College and eventually wants to set up his own business. Atkshayapon is inspired by her father and wants to pursue medicine – she’s studying for The National Eligibility Entrance Test (NEET).

With over 60% of the underprivileged students at Isha Vidhya studying on scholarships, many of...

Many renowned professionals - ranging from an Indian Air Force pilot to an IPS officer, among...

Isha Vidhya alumni credit their alma mater and teachers for all their achievements. Today,...