Students Take Up Cause of Dengue Awareness

It isn’t often possible to gauge the impact of the work we do… cause and effect is often a tricky business, and sometimes so long-term that change is imperceptible. However, with Isha Vidhya, Isha Foundation’s rural education project,...

It isn’t often possible to gauge the impact of the work we do… cause and effect is often a tricky business, and sometimes so long-term that change is imperceptible. However, with Isha Vidhya, Isha Foundation’s rural education project, we now and then get heartwarming reactions to our interventions.

To place it in context, the students of Isha Vidhya’s eight schools in Tamil Nadu are from rural homes, often poor and underprivileged. The project’s ambition is to educate them, and inspire them into being people the world can depend on.

Recently there was a telling story – an initiative taken by these children themselves. Dengue has become a menace in Tamil Nadu and children are the worst affected by this fever that is transmitted by mosquitoes. The teachers at Isha Vidhya schools felt the need to create some awareness about this infection and the precautionary measures to be taken.

As a start, Ms Chitralekha, the Principal of our school in the coastal town of Cuddalore, talked about dengue in the morning assembly – detailing the cause of the disease, its symptoms and also the preventive measures. After assembly, senior class students came up with the idea that this information must be broadcasted more widely – it must be passed on to parents and the local population as well. Quickly, they prepared a neat, informative pamphlet in Tamil which was photocopied with the help of office staff. Then the children went about distributing the pamphlets among the local people, taking the opportunity to explain the dangers of the fever as well. Although some teachers accompanied them, the students did all the talking. The initiative was highly appreciated and everyone they spoke to promised to follow the instructions in the pamphlet. The pamphlet was posted on the school notice board as well.

Some of the guidelines in the pamphlet were: 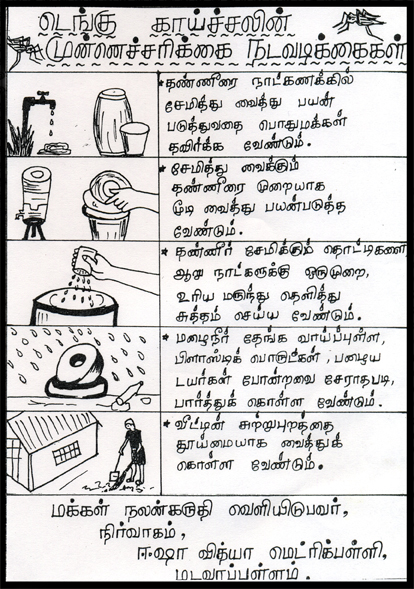 Well done, children, and thank you!