Project GreenHands organized a cycle rally and a Velliangiri clean-up campaign to commemorate World Environment Day, and spread awareness about the ecology and environment.

Project GreenHands organized a cycle rally and a Velliangiri clean-up campaign to commemorate World Environment Day, and spread awareness about the ecology and environment.

Tamil Nadu has the unique distinction of being home to three biosphere reserves. Historically, the people of this land, and indeed the whole of India, have had a deep connection with the earth and environment. One of Project GreenHands (PGH) aims is to reactivate this connection and rejuvenate the bond that people feel with nature.

To commemorate World Environment Day, PGH, in association with Salim Ali Centre for Ornithology and Natural History (SACON), organized a clean-up campaign of the Velliangiri Mountains on June 1. The Velliangiris – known as the Kailash of the South – sees lakhs of devotees who undertake a pilgrimage to the temple on the Seventh Hill. With such a rush of people, many water bottles, polythene bags, plastic covers, and wrappers are discarded on the forest path, posing a huge risk to the environment. The campaign was aimed at eliminating this garbage. The President of Ikkarai Boluvampatti handed over garbage bags and other cleaning materials to volunteers, who made their way up to seventh hill, cleaning all plastics and waste materials on the way. Over 250 volunteers, NSS students, school and college students, employees of corporate companies and children from the nearby villages participated in the activity, winding up the effort at around 4 pm.

At Chennai, PGH in association with the Tamil Nadu Cycling Club (TCC), organized a cycle rally to create awareness on global warming and carbon emissions. The rally was flagged off at 7 am by Mr. R Nataraj, former Director-General of Police (DGP). In a speech acknowledging PGH and TCC’s efforts to organize the event, Mr. Nataraj mentioned that he would have actually liked to come to the function by cycle, but requirements to wear a helmet prevented him!

The cycle rally started from VHS near Madhya Kailash and went up to Siruseri, returning to VHS at 9.30 am. A nine-year-old boy along with his father also participated, standing as an inspiration for everyone else.

Later in the day, PGH organized a function to launch its planting season for 2014. Member of Parliament from Coimbatore, Mr. P Nagarajan, along with the Commissioner of Coimbatore Corporation Ms. G Latha, and Dean, Tamil Nadu Agricultural University, Dr. S Mahimairaja were guests at the function. PGH has facilitated the planting of 20 million saplings so far, and aims to plant 4 million saplings this year.

To support PGH, please visit GiveIsha, and help PGH create a greener planet. Don’t forget to download the ebook, “A Tree Can Save The World.” Pay whatever you want and get it! All proceeds go towards supporting PGH. 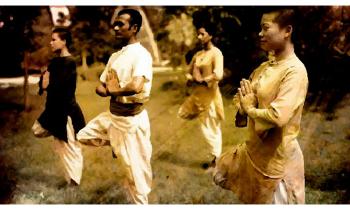 This Earth Day, here’s a simple step you can take to help the planet, by striking a pose! 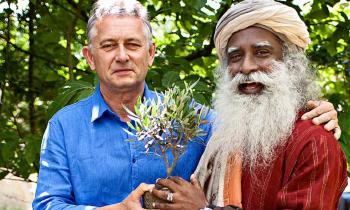 “I Love Trees” is a campaign aimed at getting people closer to nature, declaring their... 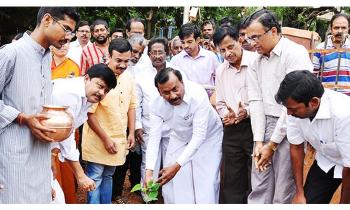