A small initiative of Project Green Hands to train students in 486 schools in Erode & Coimbatore contributed to the planting of 3.5 million saplings in Tamil Nadu combined. Read how it happened!

Now in its sixth year, the Green School Movement, a joint initiative of Isha’s Project GreenHands and the Tamil Nadu State Education department, has involved nearly one lakh students from 2,200 schools in six districts of Tamil Nadu. This movement has not only provided a platform for children to be in touch with nature but has empowered them to nurture and plant 3.5 million saplings in Tamil Nadu as of today.

Read how growing saplings has been a highlight of Elavarasan’s life for many years since he sowed his first seed. Elavarasan is a 12-year orphan from Sadhguru Seva Ashram orphanage in Coimbatore and studies in Devanga Higher Secondary School.

One Sapling at a Time

“I could never forget when Dhanasekaran Sir, our NGC teacher, told us that we would learn to grow saplings that evening – 5 PM seemed like too far away! At 5 PM sharp we all gathered in the courtyard. Dhanasekaran Sir, along with one Anna from Isha, explained to us how a tree grows from a seed, and how delicate the process of growing saplings is. Each of us was given covers to fill soil in and the seeds to sow and grow our own saplings! I was super excited to do this and already began dreaming about the plant that would sprout out of the seed that I sowed that evening. We watered these seeds at regular intervals and took care of them ourselves – and waited to see the first leaves coming out. I will never forget my excitement the day I saw my first sapling sprouting. I felt so happy!

Later we formed a team to divide the work and maintain the saplings. Once the saplings had grown to a point, we kept one sapling each in our school and distributed the remaining to the other children and in the shops nearby. Having made this contribution I felt proud that even as a child, I could make a difference, one sapling at a time!”

On the other hand, Anitha and Indira, 8th standard students of Gobichettipalayam Government School in Erode District, Tamil Nadu, understood at this young age that planting trees is the simplest act to counteract the degradation of natural resources. After attending an awareness program run by PGH, the girls lobbied within the school to mobilize students and staff to set up a school tree nursery as Project GreenHands had suggested. And they succeeded! By December 2011, the nursery in their school had produced 2000 tree saplings.

Elavarasan, Anitha and Indira are among one lakh students from 2,200 schools across 6 districts of Tamil Nadu and 1 Union Territory, who feel empowered to make a difference in the world. Tiny may be their hands, but together they have grown nearly 10 lakh saplings to date.

Developing Green Consciousness – Not a Lecture

When you think of an environmental awareness program for school children, you usually think of an hour-long talk or an intellectual seminar about the effects of global warming and hence the importance of planting trees. Most of us have been to such awareness talks, temporarily felt guilty, maybe planted a tree or two, but never did anything further.

But the Green School Movement, a joint initiative of Isha Foundation with the Tamil Nadu Education Department, aims to develop green consciousness among school children, train them in raising saplings and enrich them with the experience of nurturing another life.

GSM : The Mechanics to Warm Your Heart

Step One: To implement the project in a particular district, first we get the approval from the Chief Educational Officer (CEO) to hold a meeting with the headmasters of all schools in the district.
Step Two: In the meeting we explain the vision, mission and mechanics of this project.
Step Three: Interested schools join hands with PGH and become a part of the Green School Movement. Usually partnering schools already have a National Green Corps/Eco club in place.
Step Four: PGH volunteers orient two NGC students and the NGC coordinator from each school in a day-long workshop and teach them the nut and bolts of setting up a nursery.
Step Five: After the training, PGH gives each school representative the seeds and covers to raise 2,000 saplings and a mission. The mission is for them to train all members of NGC clubs via peer-to-peer education.

And lastly, it is amazing to see how right from sowing the seeds to planting the saplings, children do everything to ensure that these 2000 saplings sprout. The children are involved in the project for nearly 4-6 months… and seeing the bond that they develop with their saplings is truly heartwarming.

The Green School Movement was first launched in the districts of Coimbatore & Erode from 2011 to 2012. Following the success of the project in these districts, it has been implemented in five others:

Here are Some Statistics For Math Lovers:

To create “green consciousness” by providing children an opportunity to actively participate in environmental conservation, thus allowing them to take pride in contributing to human wellbeing.

To create holistic environmental awareness by guiding and entrusting children to plant saplings independently. Environmental conservation is delivered as a hands-on experience that is deeply imprinted on each child’s mind rather than a solely theory-based curriculum. 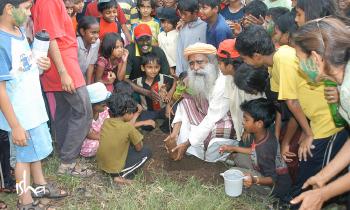 From the Guinness Book to Cauvery river, Project GreenHands is a movement that mobilizes... 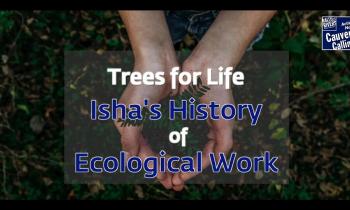 Isha’s environmental work over the last two decades has impacted millions of people from all...